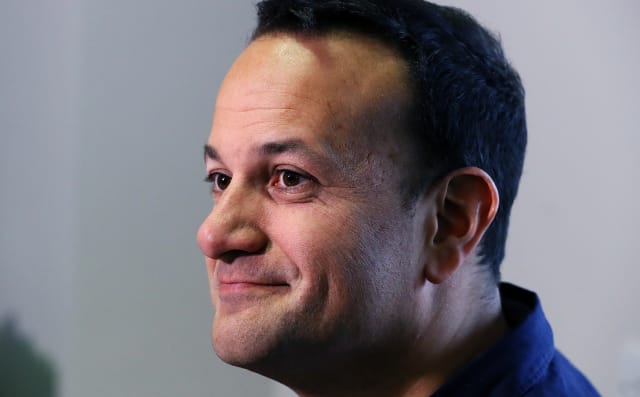 Leo Varadkar has accused Fianna Fail of taking credit in areas of government “that suits them” but said he remains open to working with the party after the General Election.

Mr Varadkar said his preference would be to lead the next government with smaller parties including Labour, the Greens and independents.

“But if the numbers fall a certain way and the only way to form a stable government is for Fianna Fail and Fine Gael to cooperate in coming together, I think that’s the responsible thing to do for the country,” he added.

“We’ve seen in Spain and Israel, where politicians have plunged their country into a second election and third elections, and the results don’t change very much.”

The Fine Gael leader also declined to go into any further detail about his past illegal drug use.

He has previously admitted to smoking cannabis in college.

The issue arose during the Wednesday night televised debate when he appeared reluctant to answer whether he had previously taken any recreational drugs.

Speaking during a campaign visit to Castleknock Community College on Thursday, Mr Varadkar was pressed on the issue.

“I answered that question in the past and I answered it truthfully and I am not going to go into any more detail,” he said.

“I am conscious that I am Taoiseach of the country to a certain extent.

“I’m a little bit of a role model and I don’t want to be doing anything or saying anything in any way that promotes drug use or suggests to young people or students in here that that’s in any way OK.”

Asked whether he thought the question was unfair, he replied: “No, I don’t. But I have answered.”

He made the comments as Fine Gael said it will enact the Online Safety and Media Regulation Bill if elected into government.

Mr Varadkar explained: “The commissioner will be empowered to develop codes of practice, to enforce those codes of practice and there will be particular focus on making sure that we don’t have harmful content and that it is taken down.

“Particularly content that promotes self-harm or suicide or eating disorders.”

Communications Minister Richard Bruton said the safety commissioner will have the power of issuing compliance notice.

“He would then issue a warning notice, and he can then impose sanctions,” Mr Bruton added.

“He will establish codes, he designates those who will have to comply with codes and develops appropriate codes for those various designated entities.

“Then he has the power to issue a compliance requirement, a warning and then sanctions.”

The former presidential candidate, who is also running for election in Donegal, handed in his nomination papers on Wednesday.

“I highly doubt that Peter Casey really wants to spend the next five years representing the people of Dublin 15 and Dublin seven. I do,” Mr Varadkar said.

“I’ve done it now for 13 years, it’s been an enormous privilege, and I hope that they’ll give me the opportunity to continue to represent them.”

Mr Varadkar met a number of students from Castleknock Community College, including pupils from a diversity class.

The Taoiseach was asked by pupils to contribute to their hearts of gratitude display in which each student writes down what they are grateful for.

Mr Varadkar wrote that he is grateful for his friends, but admitted he “doesn’t find enough time for them”.