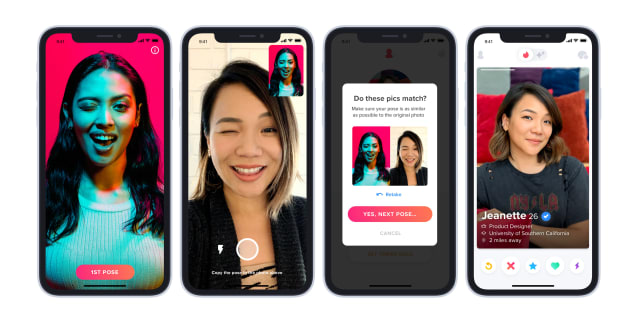 Tinder is cracking down on catfishing with a photo verification feature to help users tell if the person they are talking to is who they claim to be.

Human-assisted AI will be used to verify profile photos uploaded on to the dating app by asking people to take a number of real-time selfies.

If a match is made, profiles will be given a blue tick checkmark verifying that the person’s appearance is real.

The move is the latest step to increase safety on dating apps and prevent people from creating fake profiles pretending to be someone else.

“Every day, millions of our members trust us to introduce them to new people, and we’re dedicated to building innovative safety features powered by best-in-class technology that meet the needs of today’s daters,” said Elie Seidman, Tinder chief executive.

“I’m proud to share these updates, which represent an important step in driving our safety work forward at an unmatched scale.”

Photo verification is one of several new safety features announced by the Match-owned platform, which is being tested in select markets before becoming more widely available throughout 2020.

It is also testing offensive message detection, using machine learning technology to ask users whether they feel bothered by something someone has said and allowing them to report it.

In the US, it has teamed up with personal safety app Noonlight to allow daters to share details such as who they are meeting, where and when, as well as an easy way to call emergency services.

Tinder is one of the world’s leading dating apps, claiming to have two billion views per day and to have resulted in one million dates per week.