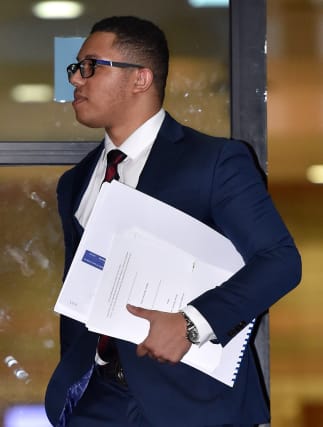 A soldier serving in the Queen’s ceremonial regiment has been found guilty of carrying out a string of armed robberies.

The pair served in the senior British Army regiment in which soldiers wear scarlet tunics and bearskin uniforms while on ceremonial duty at Buckingham Palace and Windsor Castle.

Sharpe, from Dulwich, south-east London, did not stand trial as he had already admitted four attempted robberies, three robberies and seven counts of possessing an imitation firearm with intent to cause fear of violence between July 24 and 26.

James-Merrill, from Brixton, south London, was convicted of three counts of robbery and four of attempted robbery after an eight-day trial at Kingston Crown Court.

The soldier, who has served in Afghanistan, was cleared of seven counts of possessing an imitation firearm.

The jury of seven women and five men took just a day to return their verdicts.

Wright, who is not a soldier, from Mitcham, south-west London, was found guilty of four attempted robberies and three robberies.

Jurors were told the trio cruised around south London in James-Merrill’s Mercedes and stopped off at different shops before Sharpe, disguised in black clothing, a hood and a mask, threatened shopkeepers with an imitation handgun demanding cash.

James-Merrill and Wright, who were both accused of assisting Sharpe in his acts, had said they thought he was running errands and collecting money from friends.

A date for sentence has not yet been set.