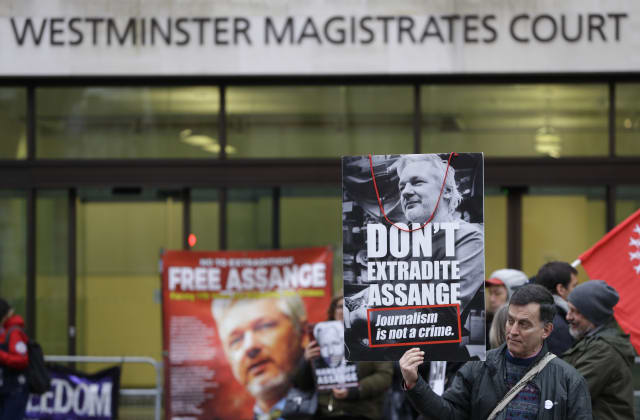 A judge has warned against any further delay in hearing Julian Assange’s fight against extradition to the US on charges over the leak of classified documents.

The WikiLeaks founder’s full hearing is now likely to run into summer, after lawyers on both sides asked for it to be split in two parts.

District Judge Vanessa Baraitser agreed to the split, but told Westminster Magistrates’ Court that she considered it a “lengthy delay” and added she was “unlikely to look favourably” on any further requests for dates to be moved.

The case will open as planned at Woolwich Crown Court on February 24, but will adjourn after one week, and continue with a three-week hearing scheduled to begin on May 18.

A lawyer for the US government described the split as “sensible” and “necessary”, and Assange’s team agreed, saying more time was needed before their case would be ready.

Assange is awaiting the outcome of an extradition request by the US, where he faces 18 charges, including conspiring to commit computer intrusion.

Assange, who is being held at high-security prison Belmarsh, appeared via videolink on Thursday and spoke only to confirm his name and date of birth.

The 48-year-old wore a grey/brown suit and beige top with black trainers and appeared to be clean-shaven.

As with previous listings, supporters queued up outside the main building before it opened at 9am and it was standing room only when proceedings in court number three got under way.

Clair Dobbin, for the US, made the application for the hearing to be split, saying various legal issues would need to be ruled on after the case was opened next month, including whether to allow some witnesses to be anonymous.

She said the US had submitted a “substantial” affidavit to the court already but that further defence evidence had since been served which needed to be responded to.

She also said the US team had experts – described as “extremely busy practitioners and academics with very full diaries” – who still needed to make their own assessments of Assange.

The US government’s main barrister in the case James Lewis QC was also involved in a trial in Northern Ireland which was of “a great deal of substance and importance”, rendering him unavailable for almost three months after the extradition case begins, Ms Dobbin said.

Edward Fitzgerald QC, for Assange, said instructing solicitors had continued to work “night and day” over Christmas but indicated the legal team was still facing difficulties in getting access to their client in prison to discuss the case.

“We simply cannot get in as we require to see Mr Assange and to take his instruction,” Mr Fitzgerald said.

He added: “Frankly, we require more time before calling the main body of our evidence.”

Australian Assange was jailed for 50 weeks in May last year for breaching his bail conditions, after going into hiding in the Ecuadorian embassy in London to avoid extradition to Sweden over sex offence allegations, which he has always denied.

He has been in custody since he was dramatically removed from the embassy building in April.