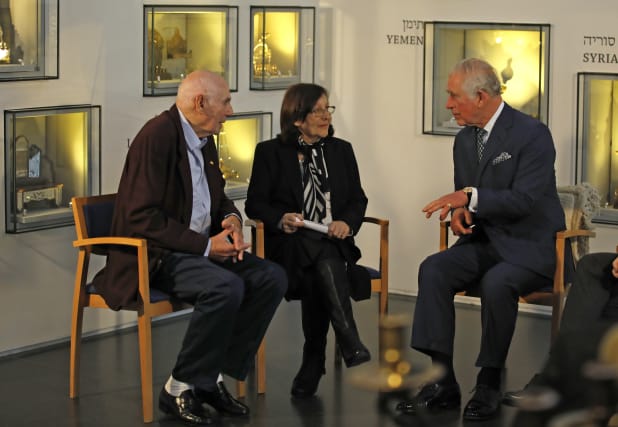 A Holocaust survivor has told the Prince of Wales about the “hell on earth” she endured while being experimented on by notorious Nazi doctor Josef Mengele.

At the Israel Museum in Jerusalem, Charles met Marta Wise, who as a 10-year-old girl was sent to Auschwitz and subjected to inhumane treatment.

He also met George Shefi, who came to England just before the war on the Kindertransport which rescued so many Jewish children from Nazi Germany.

Mrs Wise, now 85, spent 25 minutes with the prince – far longer than most one-to-one encounters on a royal visit.

She said: “He was very interested in how it was in Auschwitz and how we managed to survive.

“He was very sympathetic. He came across as genuinely interested, not just doing it for the sake of it.”

Born in Bratislava, then Czechoslovakia, Mrs Wise and her older sister were sent by their parents to live with a non-Jewish family and pretend they were orphaned refugees.

But in October 1944 they were betrayed to the Nazis, who offered large rewards to anyone who reported Jews.

She said: “Twenty-seven fully armed soldiers came to pick up two little girls. We were put into detention, and from there we were sent to Auschwitz-Birkenau and into Mengele’s experimental barracks.

“By a miracle we survived. It was hell on earth. Mengele was a particular devil. Our blood was taken. Jewish blood was no good, but it was good enough to take for the German army.

“He used to inject us with things. We had no idea what they were. You could be in absolute agony. He was a monster. There is no other way to describe him.”

After the war she moved to Australia where she became a historian of the Holocaust. She married Harold Wise and had three children before moving to Israel in 1998.

Mr Shefi, 88 – born George Spiegelglas in Berlin – was sent to Britain by his mother in July 1939 at the age of seven, unable to speak a word of English.

He lived with an English family, then moved in with a Jewish family.

He said: “I went to church for three years, crossed myself, then the next week I could not turn on the light or ride my bicycle on Shabbat or anything.”

Later in the war he went to join relatives in the US. Afterwards he moved to Israel, where he became an engineer.

He welcomed the presence of Charles and other world leaders in Israel to honour Holocaust victims, at the World Holocaust Forum in Jerusalem.

But he said it would be meaningless without further action: “I think it is very good. The question is, what will you do with it afterwards?

“Whatever they do here, if it is just forgotten tomorrow – that’s not what it was meant to do.”

He said he had spoken many times in Germany about the Holocaust, telling children: “You are not to blame for what your grandfathers did. I am here to tell you it happened, and to convince you not to let it start again.

“You are responsible to me to prevent it happening again.”