A handyman could be facing life behind bars after being found guilty of a ferocious machete attack on an officer dubbed "Britain's hardest cop".

Pc Stuart Outten, 29, was repeatedly struck over the head with a 2ft long blade after stopping Muhammad Rodwan's white van for having no insurance in Leyton, east London, on the evening of August 7 last year.

Despite bleeding heavily from six deep gashes to the head and arm, the Metropolitan Police officer managed to Taser Rodwan twice. 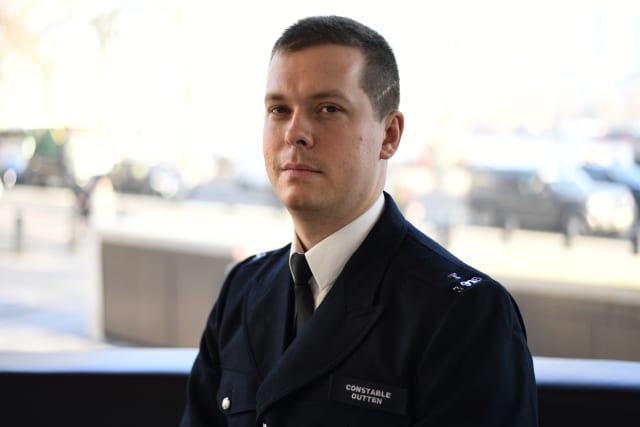 Rodwan, 56, who has previous convictions for rape and two machete attacks, claimed he acted in self defence, telling police: "My life is worth more than his life."

But graphic police body worn video showed him punching the officer before grabbing a sharpened machete as Pc Outten tried to arrest him.

Just an hour before the incident, Pc Outten had texted his girlfriend, who is also an officer: "Right I'm off to cause trouble. Stay safe my love."

Later, he sent her the rueful update that it was "a bit more trouble" than he had bargained for.

A jury deliberated for seven hours to clear Rodwan of attempted murder but find him guilty of wounding with intent to do grievous bodily harm.

He was cleared of possession of an offensive weapon, after claiming he kept it to chop up brambles on gardening jobs.

Rodwan made no reaction as the verdicts were delivered, while some of Pc Outten's loved ones wept in the public gallery.

He could face life in prison when he is sentenced by Mrs Justice Carr on Friday.

Afterwards, Pc Outten said he counted himself "very lucky" to survive, saying "thankfully" his head was hard enough to withstand the onslaught.

He said: "On that night I was just doing my job, doing what I'm trained to do, but more importantly making sure I didn't die, because that was a distinct possibility had the attack carried on.

"Once he's started hitting me in the head with the machete, then I realised it was escalating very quickly and I was having to now fight for my life.

"I recall specifically as I was falling to the floor, having fired the first shot and aiming for the second (thinking) that if this doesn't work, this might be it.

"But luckily the Taser worked. It did its job. He fell incapacitated next to me and I was able to use it to keep him on the floor and to keep myself alive."

Of his attacker, he said: "It feels good to see the system going through the paces, but personal feelings for him? I don't have any.

"There's no hatred. He did what he did, he's now paying the price for it.

"I don't feel the attack was personal. He was attacking an officer in uniform and I responded as such."

Laughing off the "hardest cop" title he was given by the tabloid press, Pc Outten said: "Luckily I have the size and build that I can take a couple of machete blows to the head – apparently – and I can act afterwards."

During the trial, the jury was not told that Rodwan had previously attacked two men with a machete in the bedroom of his flat in east London in 1996.

The defendant, then known as Rodney Reid, was jailed at Snaresbrook Crown Court for nine years for wounding with intent.

In 1983, he was jailed at the Old Bailey for three years for rape and in 2008 he received a caution for having cannabis, according to sources.

During his trial, Mrs Justice Carr turned down an application by the prosecution to tell jurors about the previous machete attacks during the trial.

Speaking outside the Old Bailey, Detective Chief Superintendent Richard Tucker refused to be drawn on whether the jury should have known about Rodwan's violent past, saying: "I am pleased a dangerous man is off the streets of London."

Paying tribute to Pc Outten, he said: "He did what I would hope the vast majority of police officers in the country would do.

"He had the training, he put that into action, notwithstanding he was very, very lucky that day and I'm very, very proud of Stuart. He did an amazing job to apprehend that individual."

The commander for the Waltham Forest and Newham area said there had been a rise in attacks on police personnel in the capital, with 16 recorded every day.

But he said: "We are not going to arm our officers because it's not necessary in terms of our demand."

According to Scotland Yard figures, 5,900 officers and staff were attacked between January and December last year, compared with 5,700 in the period between November 2018 and October 2019.

He said: "Had my colleague Pc Stuart Outten not utilised the Taser when he did, he would have received further blows and would not have been able to defend himself. It would have been fatal.

"And my colleagues are facing these kinds of incidents on a daily basis from members of the public."