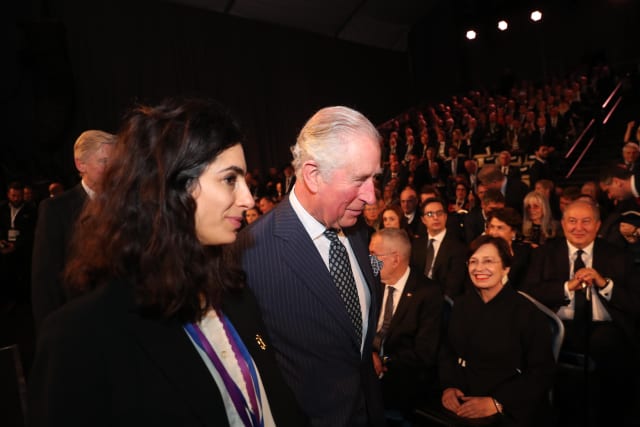 The Prince of Wales has urged nations to learn the “lessons” of the Holocaust as he joined world leaders in condemning the scourge of anti-Semitism, during an event marking 75 years since the liberation of Auschwitz.

Charles described the extermination of six million Jewish people during the Second World War as a “universal human tragedy” affecting all, not just the families of those killed by the Nazi regime.

The heir to the throne spoke during the World Holocaust Forum in Israel and told guests, who included Russian President Vladimir Putin and France’s President Emmanuel Macron, the story of “incomprehensible humanity” must not be forgotten.

And he warned that “hatred and intolerance still lurk in the human heart” but society must remain “resolute in resisting words and acts of violence”.

Speaking at the gathering, the largest international event in Israel’s history, staged at Yad Vashem, the World Holocaust Remembrance Centre in Jerusalem, Charles said: “The Holocaust was an appalling Jewish tragedy, but it was also a universal human tragedy, and one which we compound if we do not heed its lessons.”

He told the guests, who featured the Kings of Spain and the Netherlands, the stories of the Holocaust belonged to many of those in the hall and Jewish people across the globe.

Charles added: “But we must never forget that they are also our story: a story of incomprehensible inhumanity, from which all humanity can and must learn.

Warning that intolerance was never far away, he said: “We must be vigilant in discerning these ever-changing threats; we must be fearless in confronting falsehoods and resolute in resisting words and acts of violence.”

During his speech Charles also paid tribute to the “selfless actions” of his grandmother, Princess Alice, who in 1943 while living in Nazi-occupied Greece sheltered a Jewish family in her own home.

In 1993 Yad Vashem bestowed the title of Righteous Among The Nations on her and she is buried at the nearby Mount of Olives.

Charles described the title as “a fact which gives me and my family immense pride.”

The presidents of France, Germany and Russia were among those to deliver speeches to the forum, held to commemorate the 75th anniversary of Auschwitz being liberated by Soviet troops on January 27 1945.

German President Frank-Walter Steinmeier acknowledged during his speech that “the worst crime in the history of humanity was committed by my countrymen”.

He added: “Seventy five years later after the liberation of Auschwitz I stand before you all as president of Germany and laden with the heavy historical burden of guilt.”