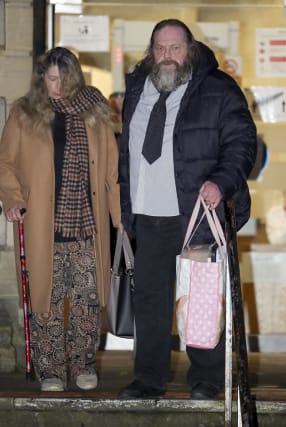 A carer allegedly starved a “vulnerable” 59-year-old man to death in order to inherit part of his £3.5 million estate, a court has heard.

James Anthony Sootheran, who was from a wealthy family of landowners, was found dead in his bedroom at High Havens Farm in South Newington, Oxfordshire, on March 18, 2014.

Lynda Rickard, 61, and her husband Wayne, 64, who both lived with Mr Sootheran when he died, are charged with his murder between March 13 and March 19, 2014.

The couple, of Edinburgh Close, Banbury, are on trial alongside Michael Dunkley, 48, Denise Neal, 39, and Shanda Robinson, 50, who are charged with fraud.

All five defendants deny the charges against them.

He said the alleged victims in the case, Mr Sootheran and his mother Mary Joy Sootheran, who suffered from dementia prior to her death aged 92 in August 2012, were reliant on Mrs Rickard for care, but were ultimately “exploited” by her.

Mr Saxby said: “She was eyeing a windfall.

“That windfall came to be dependent on Anthony Sootheran’s death. And she got impatient, and worried that the windfall might elude her.”

The court heard Mr Sootheran, who owned High Havens Farm, had “complex” mental health issues and was a recluse who was prone to self-neglect.

“She achieved (this) by isolating him, utterly neglecting him, failing to obtain appropriate medical care for him and ultimately, depriving him of food and drink.

“In the simplest of terms, assisted by her husband, she starved him to death, thereby securing for herself and her family the windfall she craved.”

He said Mrs Rickard had already admitted forging the wills of Mr Sootheran and his mother.

The forged wills entitled Mrs Rickard to half of Mrs Sootheran’s estate, valued at just under £1.5 million, and a third of Mr Sootheran’s, worth about £3.5 million, the court heard.

The jury was told Mrs Rickard had also pleaded guilty to four fraud charges, two counts of forgery, two counts of conspiracy to pervert the course of justice, and possession of articles for use in fraud.

Mr Saxby said the Sootherans were a wealthy family that owned land in Yorkshire and had “substantial” savings and investments.

They moved into High Havens Farm in 2008 to join the Rickards, who were renting the property from them.

It was agreed Mrs Rickard would care for Mrs Sootheran, the court heard.

Mr Saxby said: “Lynda Rickard says that Anthony Sootheran’s demise was a consequence of how he chose to live his life and that his death was entirely coincidental to her having forged his will.

“Instead, she did everything she could to help him and was devastated by his death.”

Mr Saxby said Mr Rickard denies “having anything to do with Mr Sootheran’s death”, adding: “Indeed, it is his case that he had very little to do with Anthony Sootheran full stop.”

Mrs Rickard is further charged with the manslaughter of Mr Sootheran through gross negligence, while Mr Rickard, 64, is accused of causing or allowing the death of a vulnerable adult.

Mrs Rickard also denies a charge of fraud, in that she allegedly abused her position as carer for Mr Sootheran by allegedly using his money for her own purposes.

They are also both accused of a single count of fraud by false representation relating to Mrs Sootheran.

They deny all of the charges against them.

Dunkley, of Brickle Lane, Bloxham, and Neal, of Radway Road, Lower Tysoe, Warwickshire, are charged with one count of fraud by false representation.

It is alleged that between January 28 and May 31 2014, Dunkley and Neal falsely claimed a will in the name of Mr Sootheran, dated February 19 2014, was genuine.

Robinson, of Sage Road, Banbury, Oxfordshire, is charged with one count of fraud by false representation between January 1 2012 and September 30 2012.

It is alleged Robinson falsely claimed a will in the name of Mary Joy Sootheran was genuine and had been witnessed in her presence.

She is also accused of conspiracy to pervert the course of justice, which she denies.

June Alsford, 77, of Little Lane in Aynho, Northamptonshire, who is not standing trial, has already pleaded guilty to one count of fraud and one count of conspiracy to pervert the course of justice.