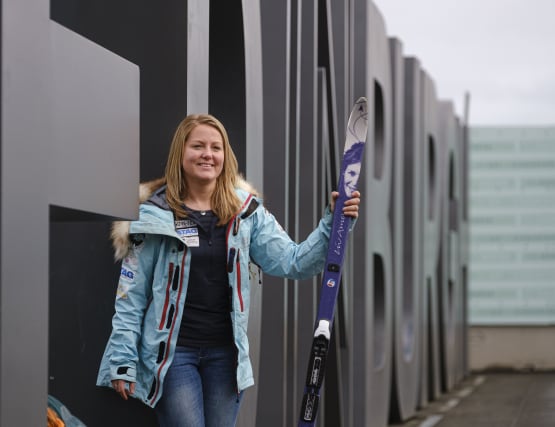 An adventurer who battled through snowstorms and minus 45C temperatures to become the youngest woman to ski solo to the South Pole has returned home.

Mollie Hughes started her world record attempt on November 13, departing from Hercules Inlet in Western Antarctica, and arrived at her destination 702 miles later on January 10.

On Wednesday morning she landed at Edinburgh Airport to a hero’s welcome from friends, supporters and sponsors.

The 29-year-old, from the city, arrived having landed in London on Tuesday and celebrated with a belated family Christmas dinner.

She said: “It’s still a very surreal feeling and I can’t quite believe I’ve done it. I think it’s going to take some time to really sink in.

“I knew it would be hard, but this has been an exceptionally tough experience, but I did it to challenge myself and to inspire others, especially other women and young people.

“I flew into London yesterday and managed to have a Christmas Day dinner with my family which was amazing, as I had been dreaming about roast potatoes for several days.

“Massive thanks to everyone that helped me achieve my goal during my training, kit preparation and fundraising.

“I may have done this expedition solo, but I had a great support network behind the scenes.”

Previously speaking to the PA news agency from the South Pole, Ms Hughes – who grew up in Devon – said she was very proud of her achievement.

Her introduction to Antarctica was a whiteout of snow and high winds which she got through by taking one day at a time and focusing on home.

Ms Hughes said she found the isolation hardest to cope with, seeing only two other skiers during her trek.

Having initially hoped to reach the South Pole by New Year’s Day, her quest was almost derailed by severe weather in the first two weeks, with Ms Hughes facing headwinds of more than 55 knots, temperatures of minus 45C and a whiteout for eight days in a row.

After finishing the journey nearly two weeks ago the adventurer spent time recuperating in a camp at the South Pole before flying on to Punta Arenas in southern Chile.

She funded her expedition by raising £75,000 from sponsors and crowdfunding, and used the trek as a way to raise money for Cancer Research UK.

Ms Hughes is due to speak at an event on behalf of the charity on January 30.

In 2017 she also became the youngest person to have successfully climbed both the north and south sides of Mount Everest.