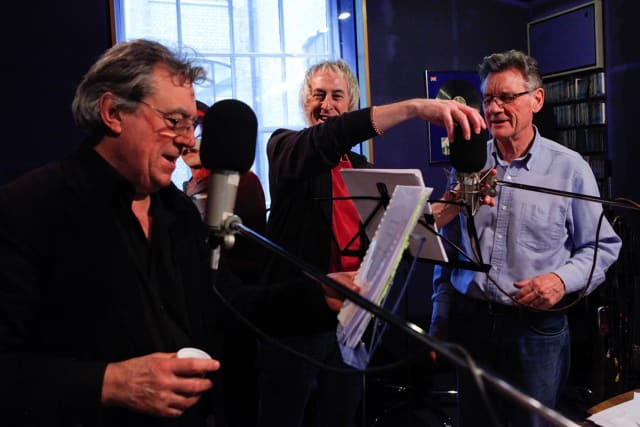 Monty Python’s sound engineer of 50 years has paid tribute to Terry Jones as a man who “loved life and lived it to the full”.

He worked with the comedy troupe across numerous projects including their last film, 1983’s The Meaning Of Life, earning a Bafta nomination for his music for the song Every Sperm Is Sacred.

Jacquemin told the PA news agency: “Our friendship was quite intense. Obviously, I have been involved in doing all their sound for such a long time. Going round his place for dinner was an experience. He would do all the cooking and he was a fantastic cook.

“He would be able to knock up a great dinner with lots of bibs and bobs just laying around. He was a lot of fun and just loved life and lived it to the full. He was an amazing person and a very clever man.

“He was well-versed in many aspects of life, which helped his creativity. He was also quite experimental.

“There were lots of times when we would do something and it wasn’t quite right and we would have to twist it around with all the ideas being thrown into the pan. We’d stir it around and we would come out with something very, very good. He was amazingly talented and very quick-witted – very fast indeed.”

Describing his own role within the Pythons, Jacquemin joked: “My job was also to make sense of their terrible filming, really.”

Jacquemin, who co-owns Redwood Recording Studios in London’s Soho, continued to work with the Pythons individually after their split in 1983.

He last saw Jones in October 2019 at Camden’s Roundhouse venue, where the Pythons celebrated their 50th anniversary with a Guinness World Record for the “largest gathering of people dressed as Gumbys” – a recurring character in their sketches.

Stars of the film and comedy world also paid tribute to Jones.

Actor and comic Adrian Edmondson remembered Jones’s appearance in an episode of sitcom The Young Ones in the 1980s.

Edmondson tweeted: “Terry Jones was the only Python who agreed to appear in The Young Ones. It was like affirmation from God himself.

“This was the man who’d directed what was, and still is, the funniest feature film ever made. We loved him for it, and always will. Sadly, he’s eaten his last mint…”

He recalled: “36 years ago I met Terry Jones. I was meant to interview him. I asked for tea, so he opened a bottle of Chablis & got me drunk.

“He was funny, brilliant and honest. He was irrepressible and is seen here repressing the very young me. Rest in Peace, Terry. You were an inspiration.”

Along with the tweet, Gaiman shared a picture taken during their interview of Jones jokingly pushing the top of his head.

The picture was captioned: “Neil at the feet of the master.”

Queen guitarist Brian May paid tribute to Jones on Instagram, writing: “So sad to hear of the passing of genius comedy star and wonderful guy, Terry Jones. What a legacy to the world. Deepest condolences to his family and the other beyond fabulous Pythons.”

Comic Rufus Hound tweeted: “You may not have the kind of affection for The Pythons that comedy fans of my vintage have, but know that if you’ve ever enjoyed any flavour of surreal, silly anti-comedy, you owe them.

“And Terry Jones was the beating heart of it all. What a man.”

Comedian Richard Herring said that Jones’ book about Chaucer’s Knight’s Tale “got me through my English A level”.

He added: “Was just thinking yesterday (as I listened to Palin’s Erebus) what a supremely intelligent group of men Python were/are.”

“He will be missed.”

Bafta also paid tribute to Jones, tweeting a message alongside a photograph of him with Sir Michael Palin in 2016, saying they were “saddened” to hear of his death.

“Here he is receiving the Special Award For Outstanding Contribution to Film & Television from friend and fellow Python Michael Palin, at the 2016 @BAFTACymru Awards.”

The Alzheimer’s Society said they were “very sorry to hear the sad news” of Jones’ death.

“Terry had been living with dementia since 2015 and we fondly remember his support at our Memory Walks. Our thoughts go out to his friends and family,” they added.