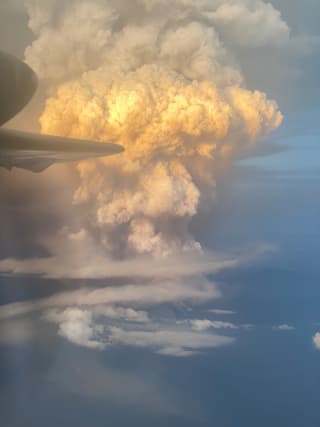 An aeroplane passenger photographed the Taal volcano eruption from his seat, describing the atmosphere on board as “fairly calm”.

Matthew San Miguel from Toronto, Canada, took photos from a flight from Manila to Kalibo on January 12 shortly after the volcano’s eruption close to the Philippines’ capital of Manila.

Posting the photo to Reddit, Mr San Miguel said: “Taal volcano erupted just as we were about to take off, we were the last flight allowed to leave that day.”

Manila International Airport was closed on Sunday January 12 and part of Monday January 13. More than 500 flights were cancelled or delayed.

Mr San Miguel told the PA news agency: “We had come from Canada for a funeral, and we’re just glad we made it on time since we were carrying the urn. We were really lucky our flight hadn’t been delayed.”

Mr San Miguel told PA: “I didn’t actually know a volcano had erupted, and a few of us didn’t either. We were already on the way to the runway when it happened, but I didn’t notice it.

“When we were up in the air, the pilot had informed us about the volcano, but I didn’t realise it just erupted. I thought it was normal since he had announced it casually, and a lot of people took photos.”

He explained that the plane arrived at its destination on time.

“My friends and family were pretty impressed with the photos, despite only being taken with an iPhone,” he added.

Buildings and farms have been damaged by volcanic ash since the eruption began, though no deaths or major injuries have been reported after tens of thousands of people were evacuated from the area.