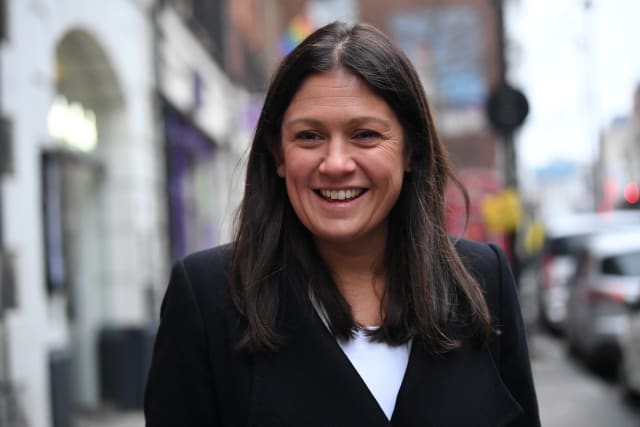 Lisa Nandy received the backing of former Labour leadership rival Jess Phillips as she made it onto the final ballot paper for the contest.

Ms Nandy joins Sir Keir Starmer in making it through the nomination process after picking up the support of the Chinese For Labour group.

Wigan MP Ms Nandy had already been nominated for the leadership by the GMB and NUM trade unions, meaning she has cleared the threshold to get on the ballot.

Ms Nandy, whose father is Indian, said: "As someone of mixed heritage, I'm incredibly proud that it is Chinese For Labour who have secured my place on the ballot paper."

She said she was "looking forward to getting out intro the country and laying out my vision for reuniting the party, rebuilding trust, and returning Labour to power at the next election."

Ms Phillips announced on Tuesday that she was pulling out of the contest, saying she was not the right person to bring the party back together after its crushing general election defeat.

She said that while she would support both Sir Keir and Ms Nandy among the remaining four contenders, the Wigan MP would be her "number one preference".

"I've said that right now, I can't bring the party together and that's why I have withdrawn from the race," Ms Phillips said.

"I think both Lisa and Keir can unite the party and begin the process of winning back trust with the country.

"I'll be voting for Lisa and Keir, as I think that they can do that. Lisa will be my number one preference."

In a campaign speech at the Centrepoint charity in London, Ms Nandy said she would raise taxes in order to reverse Tory welfare cuts.

She said the party needed to go out and make the case that taxation was not "evil" but was essential to pay for public services.

She said she would use the tax system to penalise large companies which refused to pay their employees the living wage.

Ms Nandy said the welfare system was in "real trouble" and that Labour needed to recover the ambition which led it to build the welfare state after the Second World War.

She said that while she did not want to "trash" the record of the last Labour government under Tony Blair and Gordon Brown, for too long it had accepted the Thatcherite economic consensus.

She said Mr Corbyn's rejection of the politics of austerity had been an "important moment" for the party.

In a BBC Radio 4 Today programme interview, she said: "I'm not going to trash the legacy of the last Labour government because things like the minimum wage were complete game-changers in towns like Wigan, and the investment that went into health and education was really important.

"But it is certainly true to say that the consensus that Thatcher built lasted all the way through the New Labour years."

Meanwhile Rebecca Long-Bailey, the favourite of the Labour left, has insisted she would take the party in "completely different directions" to Mr Corbyn.

The shadow business secretary dismissed claims the outgoing leader and his allies would still run the party if she won, and said it was "disrespectful" to say she is another version of Mr Corbyn.

In an interview with the Daily Mirror, Ms Long-Bailey, a frontrunner in the contest, said: "Insinuations have been made: 'Oh these men have been pulling strings in the background'.

"I've been proud to stand on the policy platform that we've had.

She previously gave Mr Corbyn a score of 10/10 on his leadership, but told the paper Labour has to recognise what it got wrong and "can't then get them wrong again".

Ms Long-Bailey is yet to secure her place on the ballot, but is expected to get through the nominations process on the back of union support, while shadow foreign secretary Emily Thornberry also hopes to be in the final stage of the contest.

Each candidate must receive nominations from at least 33 Constituency Labour Parties (CLPs) – or at least three affiliates, two of which must be trade unions, making up 5% of total affiliated membership.