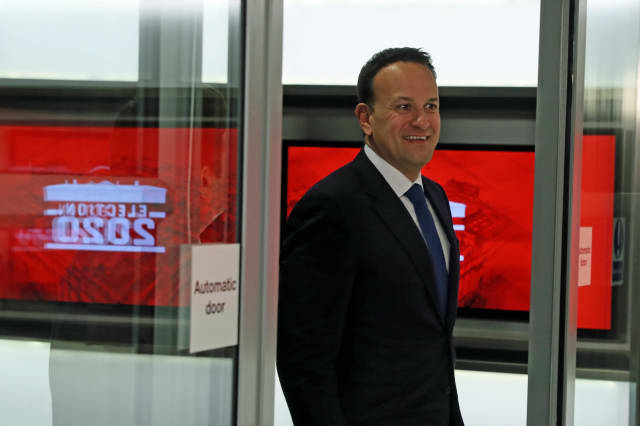 Taoiseach Leo Varadkar has said he is willing to enter a confidence-and-supply arrangement with Fianna Fail but has ruled out going into a coalition with Sinn Fein.

The Fine Gael leader said he would be open to working with a minority Fianna Fail government if his party failed to secure enough votes in Ireland’s February 8 General Election.

During the first televised head-to-head debate of the campaign, Mr Varadkar said he would be willing to enter into a coalition with any party except Sinn Fein.

During a number of heated exchanges, Mr Martin focused on Fine Gael’s record in government over the last nine years, highlighting the party’s failure in housing and health.

The debate came with Mr Martin moving to capitalise on positive recent opinion polls indicating a change of administration could be on the cards.

“Fine Gael wants to be in government and we have shown we can work with other parties,” Mr Varadkar said during the debate.

“We have shown we can put governments together. My preference is to form a coalition.”

Mr Martin accused Mr Varadkar of failing to be grown-up.

“There are more personal attacks on me than on Fianna Fail policies,” Mr Martin said.

“We believe there is a need for a new government.”

He added: “Our country needs a new government that will put aside the obsession with party politics.

“I am looking forward to talking about real change.”

Mr Varadkar took a break from campaigning around the country to prepare for the live debate.

He leads the largest party in Ireland and a minority coalition Government.

Asked about the impression Fine Gael lacked empathy and understanding, Mr Varadkar said he cared deeply about the country.

“I know people say that about my party and about me but I care deeply about our country and the problems we face. I maybe can’t put it into words as good as my opponent does but I do it in action,” he said.

“I show the fact I care through the work I do.

“I absolutely acknowledge we haven’t done enough so I can do more and reduce income tax.

“We have started to make plans that make a difference.

“There are 21,000 families sitting around a dinner table in houses that didn’t exist in the last number of years.”

Fine Gael has suffered a difficult start to their re-election bid with two recent opinion polls showing a drop in support for the party and Mr Varadkar’s personal rating.

The figures in an Irish Times/Ipsos MRBI survey published on Monday put support for Fianna Fail on 25%, Fine Gael on 23% and Sinn Fein on 21%.

After discussion about drug gangs and drug use among the middle class, debate host Pat Kenny asked the two leaders if they had ever taken recreational drugs.

While Mr Martin said he had not, Mr Varadkar said he had previously answered that question “truthfully”.

When probed on what that answer was, Mr Varadkar hesitated before replying: “Yes, but it was obviously a long time ago.”

The party leaders were also asked about their refusal to go into power with Sinn Fein.

Mr Varadkar said while he had respect for Sinn Fein president Mary Lou McDonald and vice-president Michelle O’Neill, he did not believe they were a “normal party”.

“They have a strange decision-making process where key decisions are not made by elected people but by Sinn Fein activists and that troubles me,” Mr Varadkar said.

Mr Martin said he had a fundamental problem with how the party was governed.

“Sinn Fein continue to try and impose a narrative about the murderous campaign by the IRA,” Mr Martin added.

“We will not be going into government with Sinn Fein.”

Ms McDonald criticised Wednesday evening’s head-to-head debate format on Virgin Media One and said it was unfair she was excluded as the leader of Ireland’s third largest party.

Turning to Sinn Fein’s calls for a border poll, Mr Varadkar said he believed a united Ireland would happen in his lifetime.

But he said he was against a border poll in the next five years because he believed it would be defeated.

Mr Martin said a united Ireland was possible in his lifetime.