How the Windsors earn their money 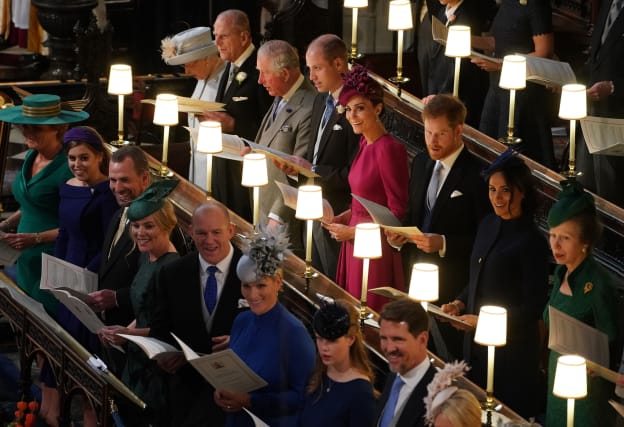 The Duke and Duchess of Sussex are predicted to make millions when they quit royal life.

The pair had hoped for a dual role, earning their own money and still carrying out royal duties, but their plan was unworkable and labelled a “toxic mix”.

How have other royals fared in business?

– The Earl and Countess of Wessex

Before becoming full-time royals, Edward and Sophie attempted to carve out dual roles, combining working in business with royal duties, but it ended in disaster.

Sophie, who co-ran a public relations firm, R-JH, was tricked by a “fake sheikh” undercover reporter offering a lucrative contract, and hinted he would get greater publicity because of her royal role.

Edward had his own television production firm called Ardent.

Many of its films dealt with the royal family and its history, but it made substantial losses.

The earl sparked a bitter feud with his brother the Prince of Wales when one of his crews were found filming at St Andrews University shortly after Prince William began studying there, in defiance of a request for media to leave him alone.

Stricter guidelines on royal business activities were introduced after a palace review following the “Sophiegate” scandal.

But, in the end, the Wessexes gave up their businesses to become full-time royals in 2002.

– The Duke of York

Andrew has been accused of exploiting his previous role as Britain’s trade envoy to further his financial interests.

A Mail on Sunday investigation claimed the duke had conflicts of interest between multi-millionaire property developer David Rowland and his role as the UK’s special representative for international trade and investment.

But Buckingham Palace insisted the duke was promoting British interests and “not the interests of individuals” while in the post.

The duke earned himself the nickname Air Miles Andy for his lavish use of helicopters and other aircraft at public expense.

In 2007, he sold his Sunninghill Park mansion – a wedding present from the Queen – for £3 million more than its £12 million asking price to the son-in-law of the president of Kazakhstan.

Andrew stepped down from public royal duties amid the Jeffrey Epstein scandal, but it is not known what his future working plans will be, if any.

The Queen uses an unknown amount of her £21.7 million a year Duchy of Lancaster income to partly fund her second son.

– The Duchess of Cambridge

Kate Middleton, as she was before she married the Duke of Cambridge, avoided courting controversy when she wed William in 2011 by giving up working for her parents’ party paraphernalia firm.

She was previously a part-time accessories buyer for the fashion chain Jigsaw, owned by friends of her family Belle and John Robinson.

Andrew’s daughters Beatrice and Eugenie are not full-time working royals and both have their own jobs.

Beatrice is vice president of partnerships and strategy at Afiniti, an artificial intelligence software firm, while Eugenie is a director at the contemporary art gallery Hauser & Wirth in London.

They do have some charity patronages and sometimes appear at royal events such as palace garden parties and Trooping the Colour.

It is likely that as HRHs, they may have to consult the Lord Chamberlain before taking on new business activities – a rule which forms part of the guidelines for working royals.

The Queen’s eldest grandson runs the UK arm of events and sponsorship agency Sports and Entertainment Ltd (SEL), after a previous career working for RBS and in Hong Kong on a Williams Formula One sponsorship deal.

Mr Phillips, who is not an HRH and does not carry out royal duties, has also appeared in an advert for milk in China, the Daily Mail revealed.

Questions were raised in 2016 when Mr Phillips’s agency staged the Patron’s Lunch street party for the Queen’s 90th birthday.

It was Mr Phillips’s idea, but the event was not put out to tender.

SEL Ltd was paid £750,000 for organising the celebration, but the Patron’s Fund charity defended the payment, saying there were running costs and Mr Phillips’s company had made no profit.

He was criticised in 2008 for selling photos of his wedding to Canadian bride Autumn Kelly to Hello! for a reported £500,000.

The Queen’s granddaughter Zara Tindall has forged her own career as a champion equestrian, winning an Olympic medal and securing numerous brand ambassador deals, including with Land Rover, Rolex, iCandy prams and clothing brand Musto.

She has her own range of equestrian-inspired jewellery with Calleija, including saddle-shaped cufflinks and coronet rings.

But Zara has no royal title and is much further down the line of succession than her cousin Harry.

Not a royal as such, but an in-law of the royals, Zara’s husband, former England rugby player Mike Tindall, has been able to pursue his own work in the limelight.

He appeared as a contestant on the Channel 4 show The Jump, and on Bear Grylls: Mission Survive, shown on ITV.

Tindall revealed he does not have to ask permission from the monarchy before taking on a public role, but does think about possible consequences for the royals.

“That would always come up, yes, of course, but ultimately it’s what we want to do first,” he said.

She is the author of a number of books, including The Cheetah’s Tale and the Serpent And The Moon, and the princess’s own website describes her as a “writer, historian, lecturer, interior designer and art consultant”.

The Kents sparked a scandal in 2002 when it emerged they paid a peppercorn rent of £69 a week for their grand apartment in Kensington Palace.

Dubbed the “Rent-a-Kents”, the couple were criticised for being subsidised by the taxpayer when they did not carry out official royal duties.

The Queen later paid the full £120,000 rent on their behalf for the next few years, but the deal did not last forever and they eventually had to take over the cost in 2010.

Harry and William’s cousin Lady Kitty Spencer has also appeared in an advert for milk in China.

Diana, Princess of Wales’s niece is not a Windsor, merely a relative of the royals.

But the Daily Mail reported that the 29-year-old model told Chinese journalists: “The day of the royal family usually begins with a cup of milk or a cup of tea.”