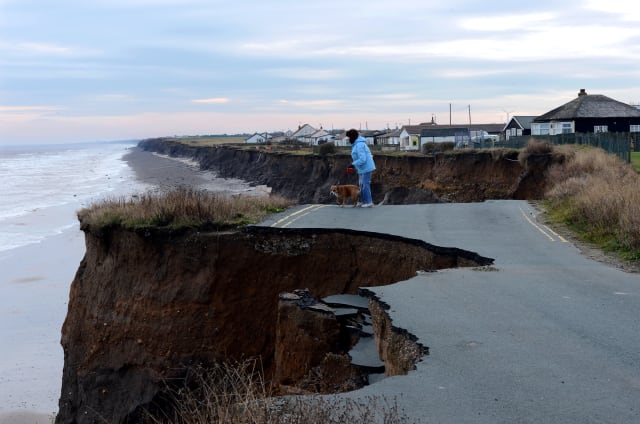 A homeowner whose house is just metres from falling into the sea said she feels “totally abandoned” by the authorities, as councillors pledged to lobby the Government for more funding.

Deborah Hawksley, 61, has a holiday chalet on Green Lane, Skipsea, where residents have been told their homes are among 24 on the East Yorkshire coast that will be lost to coastal erosion within the next five years.

Ms Hawksley, whose family have owned a property on the cliff top since 1934, said the thought of losing her “slice of paradise” is “utterly devastating”, and she urged the Government to fund more sea defences.

The former professional opera singer attended a council meeting in Beverley on Wednesday morning, where councillors discussed a recent report that found areas of the Holderness Coast were eroding at a rate of more than one metre each month.

Richard Jackson, principal sustainable development officer at East Riding of Yorkshire Council, told the meeting the council is continuing to work with communities where defences are not sustainable.

He said the council had “limited” financial support to help residents cover the cost of demolishing their properties – which can cost between £15,000 and £40,000 – but they are continuing to ask the Government for funding.

David Elvidge, who chaired the meeting, said: “The sub-committee supports the council’s decision to lobby Government for a dedicated ongoing fund.

But Ms Hawksley said she has had no contact with the council and would rather the Government funds more sea defences.

She said: “It seems like we are totally abandoned, like they have no thought or compassion for our situation, for the fact that we are losing our homes.

“I can’t describe how devastating it is – it’s utterly devastating because for me, and I imagine many people who live along here, this is paradise.

“How many people have the opportunity to look from their own property, straight out to that. It’s totally devastating to lose it.

“There are times when the sea is literally hitting this cliff, coming halfway up and then a wall of sea cascading right up into the sky and then you realise that it’s just a matter of metres from your home.

“I believe when it reaches 9.2 metres they will serve notice on us to evict us. Once this has gone then we lose our little slice of paradise.”

Ms Hawksley said she and her family would cover the cost of demolishing their home, but added: “What a terrible way to have to spend your money.”

The report presented to the council’s Environment and Regeneration Overview and Scrutiny Sub-Committee found the coastline is eroding at a rate of between 0.5m and 4m each year, but some areas recorded losses in six months that were nearly double the annual rate.

It predicts this erosion, which is likely to increase in future due to climate change, will put 24 homes in Skipsea at risk by 2025.

Government decisions have been not to defend much of the sparsely populated coastline, with coastal defences not economically, socially or environmentally sustainable for large stretches of the coast.

Councillor Paul Bell told the meeting it is a “very emotive subject” for people who have invested in properties and thought they would live in them for the rest of their lives.

He said: “The bottom line is they don’t want to move.”

Ms Hawksley said her family’s first property was lost to the sea in 1986 and they built their new home on its current plot.

She said: “My heart is here.

“The Government is going to have to do something about the erosion on the east coast otherwise we’re going to lose vast swathes of the United Kingdom.”

Stock markets pause for breath after plummeting on coronavirus fears