Criminals stashing knives in parks amid rise in stop and search, say police 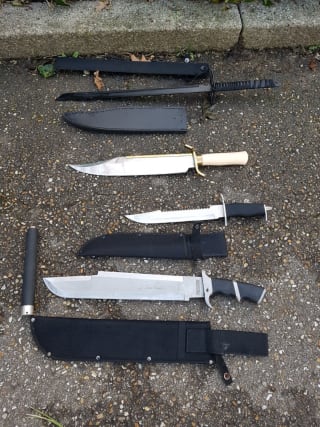 Violent criminals are stashing knives in parks and children’s play areas as stop and search is used more, a senior police officer has said.

Detective Chief Superintendent Lee Hill, who leads the Metropolitan Police Violent Crime Taskforce, said officers find hidden weapons on a daily basis in London, typically in open spaces such as parks where they can be accessed quickly.

Asked if there was a link between increased use of stop and search and the number of weapons found, he said: “It’s difficult to say with any certainty that is the case, I’ve no doubt that does play into it.

“Obviously with the increase in stop and search, people come alive to that, that’s the reality of the situation, and we are seeing more weapons being concealed.”

In one location, Crouch Hill, in north London, eight knives were found hidden during three weapons sweeps in the course of a week, several of which were in a playground.

Mr Hill added: “These knives could have fallen into the wrong hands, worse they could have been acquired by young children.”

Inspector Richard Berns, who is based in Camden, north London, said on Twitter that stop and search meant criminals were “too afraid” to carry knives, and were instead hiding them to be retrieved later.

There were 149 homicides in London in 2019, up from 133 the previous year and despite a drop nationally.

Assistant Commissioner Mark Simmons insisted that the force is taking the right action to try to bring numbers down, but admitted it is a “huge” challenge.

Speaking at Scotland Yard, he said: “The challenge remains huge for us in terms of how we take the next step in tackling violence.”

One hundred officers have been moved into teams targeting violent crime from other parts of the Met.

As well as targeting areas that are hotspots, investigators are focusing on around 200 known criminals such as habitual knife carriers, prolific robbers and serial violent offenders.

Commander Jane Connors said: “They are a range of habitual knife carriers, prolific robbers, prolific violent offenders, so it is a range of different offenders within that who we believe are causing the highest harm and exploiting young people, driving violence.”