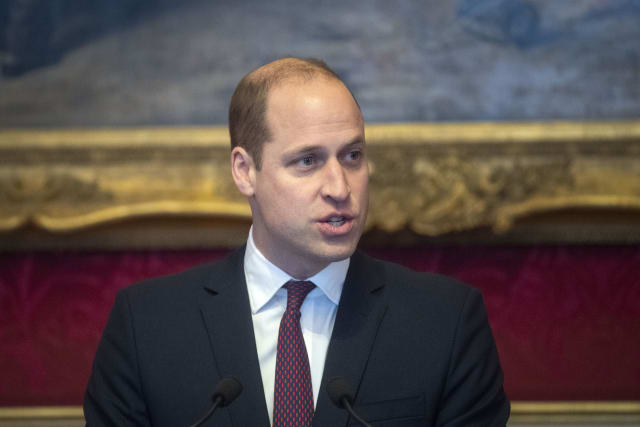 The Duke of Cambridge has called on organisations to help end the “abhorrent crime” of illegal wildlife trade, following what he called an “encouraging” year of seizures and investigations.

William welcomed Kenyan President Uhuru Kenyatta to St James’s Palace for a meeting of the United for Wildlife Taskforces.

The duke made a speech to the meeting on Tuesday, the day after he and the Duchess of Cambridge hosted a Buckingham Palace reception for delegates attending the UK-Africa Investment Summit.

It came as the Duke of Sussex travelled to Canada after attending the summit in London, which is likely to be one of his few remaining official engagements before he steps back from the royal family in the spring.

Harry flew to Vancouver to be reunited with the Duchess of Sussex and son Archie, after concluding talks about the couple’s future roles.

Addressing the meeting, chaired by Lord William Hague and attended by US ambassador Woody Johnson, William called it an “exciting time” for the two taskforces to be coming together.

“We start this year, and indeed this decade, in a very strong position,” he said.

“The world’s largest transport and financial companies – many of whom are represented here today – are changing their everyday procedures.

“It is now becoming business as usual for transport companies to track down illegal wildlife products in their cargo, and for banks to investigate and report suspicious transactions related to illegal wildlife crime.”

But the duke acknowledged how “crucial” the commitment from the Transport Taskforce and Financial Taskforce was, “because sadly the demand for wildlife products has not diminished”.

“There are still too many criminals who know that they can find a market and believe they can act with impunity,” he said.

“Everything that you do to root out corruption, improve your processes and techniques, and flag suspicious activity to law enforcement helps make this trade too risky for criminals to stomach.”

The duke said it was “encouraging” that last year saw a record number of wildlife seizures and investigations.

He praised Operation Blizzard, co-ordinated by Europol and Interpol, which resulted in 12 arrests and more than 4,000 seizures of live reptiles.

William concluded his address by thanking Lord Hague, the organisation’s chairman, for leading it “so deftly”.

He then asked the organisations to play their part in helping to end the “abhorrent crime” of illegal wildlife trade, which includes the poaching of elephants for ivory and tigers for their skins.

“Please, please bring new ideas to the table, maintain and increase our momentum, and play your part in ending this abhorrent crime,” he said.

Created in 2014, UfW was founded by the Royal Foundation, a joint venture between William, Kate and Harry.

But Harry departed the foundation shortly after he and Meghan split their household from Kensington Palace.