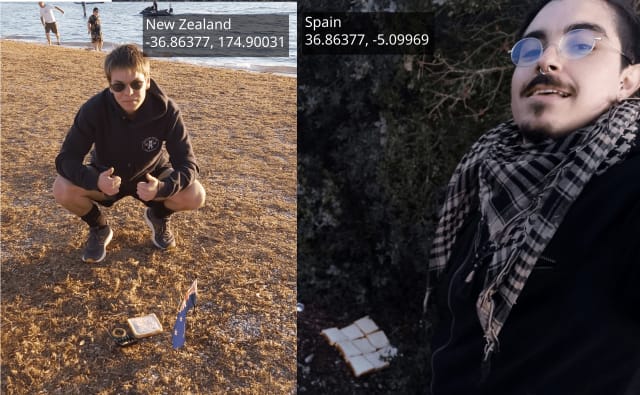 An Earth sandwich has been created by two men who placed bread on the ground at precise locations at opposite ends of the world.

The project was the brainchild of Etienne Naude, a student from Auckland, New Zealand, who roped in Spaniard Angel Sierra to help him make a dream he had harboured for several years a reality.

Using an online tool called Tunnel To The Other Side Of The Earth, which allows users to enter a spot on a map and shows its direct opposite on the other side of the world, he discovered the necessary location for the other piece of bread was in southern Spain.

He sent out a post on a Spanish message board on Reddit and eventually found Mr Sierra, a 34-year-old chef, to help.

From that point it still took around two months to put the plan into action.

“There were many practical challenges, the biggest of which was communication due to the apposite time zones,” Mr Naude, 19, told the PA news agency.

Eventually, after one failed attempt, the pair managed to find a time when both were available, and Mr Naude made his way to nearby Bucklands Beach, while Mr Sierra travelled the few kilometres from his home in Ronda, near Malaga, to reach the spot’s opposite point.

To mark the occasion, Mr Naude even had some special bread laser engraved with an image of an Earth sandwich thanks to some specialised equipment he accessed via his university.

He said: “The lasered Earth sandwich design was made on 20 slices of white bread using a state-of-the-art laser cutter which as a student at Auckland Uni I have free access to via the Unleash Space maker space. The equipment is often used to make fun projects like this.”

Mr Sierra, meanwhile, put nine pieces of bread on the ground to try to ensure the sandwich was complete even if their measurements were slightly off.

Mr Naude said he was “happy” with the result, adding that it “did live up to expectations”, while Mr Sierra said it was “a very fun thing to do”.

And an international friendship seems to have been formed as the pair have continued to chat via Reddit in the aftermath of their project.

Mr Naude said: “Angel seems like a great guy and if he ever comes to New Zealand I’ll be very happy to meet up with him for a chat.”

The pair are not the first to construct an Earth sandwich – artist Ze Frank masterminded a similar scheme, also in Spain and New Zealand, back in 2006.