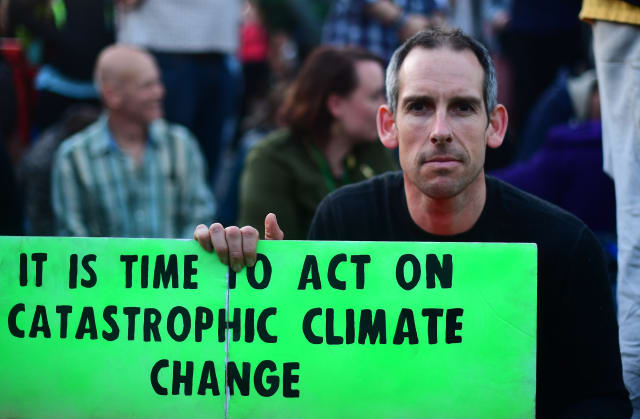 An Olympic gold medal-winning canoeist convicted of a public order offence after Extinction Rebellion protests has said he acted out of fear for the future of the planet.

He was arrested on Waterloo Bridge in April with other protesters after they refused to comply with conditions imposed by police.

Stott, from Nottingham, won the slalom event with his partner Tim Baillie at the London 2012 Olympic Games and was awarded an MBE for services to canoeing the following year.

Stott had denied having knowingly failed to comply with a condition imposed by a senior police officer under Section 14 of the Public Order Act 1986 – a law that gives police the power to impose restrictions at a static protest, including ordering protesters to leave the area.

The Metropolitan Police had ordered protesters to move to another site at Marble Arch.

Dressed in a grey suit and wearing an Extinction Rebellion pin on his jacket lapel, Stott said he acted out of a “sense of fear” and a “sense of duty”.

He told the court he fears we are “facing the collapse of civilisation”, adding: “It brings really vivid thoughts and images to my mind.”

Judge Michael Snow said Stott’s Olympic triumph was “impressive”, to which the defendant replied: “Everyone has a good moment here and there.”

Stott, who took his Olympic medal with him to court, said he thinks about the future of his friend’s children, telling the court: “My heart breaks when I think about it.”

He also said he is scared for himself, adding: “For me, the stakes are too high and I must get my message through.”

Representing himself in the trial, Stott said: “As a good person, with a voice and a platform, I feel it was my duty to act in the way that I did.”

He told the judge: “We will be vindicated sooner or later and I happen to believe it will be sooner.”

Stott accepted he was on Waterloo Bridge as part of an Extinction Rebellion protest and he was aware of the police order.

Judge Snow found him guilty and handed him a conditional discharge for nine months and ordered him to pay costs of £300.

The judge said he had been responsible for co-ordinating the Extinction Rebellion trials and the defendants had been polite, engaged and grateful to police for treating them in a humane way.

Judge Snow said he had found them to be “impressive people” and pointed out that Stott was impressive in his own right.

“He has expressed eloquently the fears that he has,” the judge said, and addressing Stott, he added: “You are clearly terrified for the future.”

Judge Snow said he was satisfied there were no less restrictive means available to police than the Section 14 order, and officers did not prevent the protest from continuing.

The judge also said officers “went out of their way” to avoid arresting protesters, and he was satisfied the police condition was proportionate and lawful.