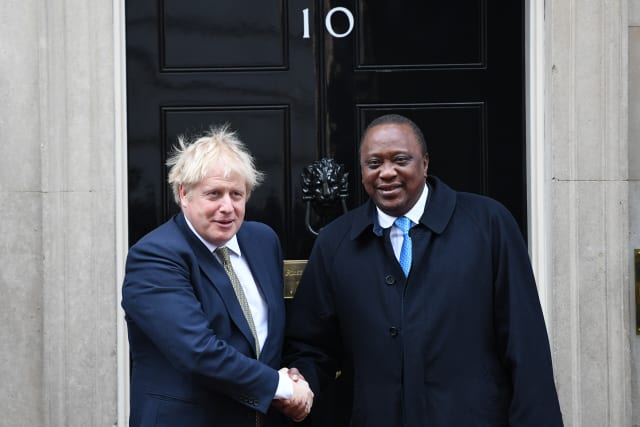 Boris Johnson has vowed to invite African leaders to the UK “regularly” following the investment summit in London this week.

The Prime Minister made the pledge in a bilateral meeting with Kenyan president Uhuru Kenyatta at Downing Street, and said “a lot of progress” had been made during the talks.

Opening the UK-Africa Investment Summit in the Capital’s Docklands on Monday, Mr Johnson set out his post-Brexit trade pitch to African leaders with his vision to put “people before passports” as part of incoming plans for an Australian-style points-based immigration system.

The Conservative Party leader tempted premiers from across the continent with the UK’s financial and education systems, and took time to meet with the leaders of Rwanda, Ghana and Nigeria at the event.

In a continuation of bilateral meetings, the PM told Mr Kenyatta he wanted to hold the gathering of African leaders more often.

In their opening exchanges at Number 10, Mr Kenyatta said the conference had been “great”, adding: “That’s the first time in a very long time we have had, as Africans, this kind of exchange with the United Kingdom.”

The PM replied: “It is about time. We are going to do them regularly.”

With the EU departure coming on January 31, Mr Johnson pledged this week to be a partner “through thick and thin” with African nations as he eyes fresh trade deals across the globe.

He had also used the conference to announce an end to UK support for thermal coal mining or coal power plants overseas in a bid to use trade to tackle the climate crisis.

The invitation to Downing Street followed Mr Kenyatta’s talks with the Duke of Cambridge to discuss ending the “abhorrent crime” of illegal wildlife trade, following what William called an “encouraging” year of seizures and investigations.

William had welcomed the Kenyan president to St James’s Palace on Tuesday for a meeting of the United for Wildlife Taskforces, a group that works to combat illegal wildlife trade by bringing together conservation organisations, law enforcement, governments and global corporations.

In an earlier meeting on Tuesday with Egyptian president Abdel Fattah el-Sisi at No 10, the PM praised his North African counterpart’s “excellent” speech at the summit.

Welcoming him, Mr Johnson said: “I told you when I came to see you in Cairo that it would be my privilege to welcome you here.”