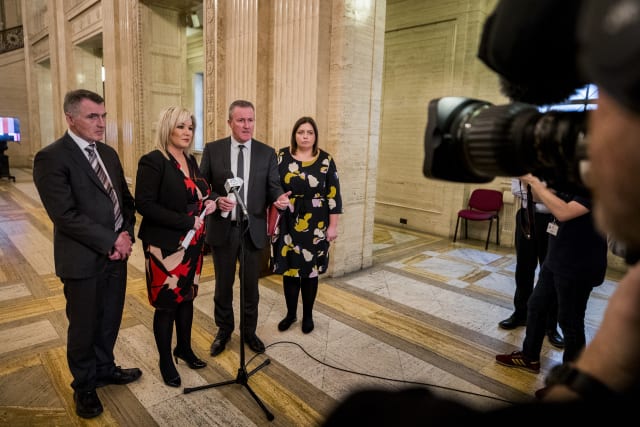 The devolved parliament in Belfast has rejected the Government’s EU withdrawal plan.

The position was agreed without dissent following a near three-hour debate in Northern Ireland.

It was one of the first substantive acts of business since the assembly was restored earlier this month following the powersharing deal.

Its two largest parties are the DUP and Sinn Fein, who oppose the Prime Minister’s Brexit deal for different reasons.

Northern Ireland has been unable to speak without the authority of elected ministers throughout most of the debate over Brexit due to the three-year suspension of the devolved institutions.

Sinn Fein deputy first minister Michelle O’Neill said: “We must work together with common cause to overcome the challenges that have been imposed on us by Brexit.

“This Assembly has not given its consent to the British Government to legislate on our behalf.”

The decision by assembly members will not affect the Government’s plan to leave the EU at the end of the month.

Northern Ireland voted in favour of Remain in the 2016 EU referendum, but there was a significant body of mainly-unionist opinion in favour of Leave.

The DUP is largely pro-Brexit, but opposes Prime Minister Boris Johnson’s plan over fears it could impose customs checks on goods travelling between England, Scotland or Wales and Northern Ireland.

Nationalists and businesses are keen to ensure the Irish land border remains open and frictionless, and are mostly in favour of remaining within the EU bloc.

There have been fears leaving could encourage dissident republican violence or re-open the debate over Irish unity, since the Republic of Ireland remains a member state.