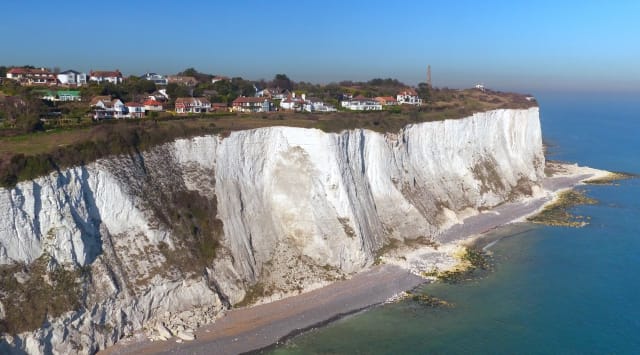 A crowdfunding campaign for a massive pro-EU flag to be displayed over the White Cliffs of Dover ahead of Brexit has raised £11,000 in three days.

Set up by South East England MEP Antony Hook on Friday, the campaign's target was just £5,500 to fund the 150sq m banner, and it made the sum in 24 hours.

The message will read: "We still love EU."

Mr Hook said: "The phenomenal success of this appeal demonstrates how passionately people in this country feel about sending a positive message to the EU."

He added: "This banner is much bigger than leave or remain. It is about communicating our appreciation for our nearest neighbours and our hope that we will continue to have the best possible relationship with them in the future."

Mr Hook said the campaign would continue to fundraise despite meeting its target, saying he and his team had "more exciting plans to make sure our message is heard right across the continent".

A spokesman for the Liberal Democrat MEP said the banner will be displayed at the top of the cliffs and a drone sent over to capture the image.

There are a number of Brexit celebrations planned for the evening of January 31, including a street party in Parliament Square.

Union Jacks are due to be flown around Parliament Square and a clock counting down the minutes to 11pm will be projected on Downing Street.

The Government has also been under growing pressure to ensure Big Ben chimes to mark Brexit, despite the fact the Elizabeth Tower in which it hangs is undergoing major renovations.

Boris Johnson said last week that the Government was "working up a plan so people can bung a bob for a Big Ben bong" after Commons authorities ruled out the proposal because it could cost £500,000.

But Downing Street has since sought to distance itself from the campaign, with a Number 10 spokesman insisting the matter is for MPs.

Mr Johnson has been accused of misleading the public over his "bung a bob" suggestion, after more than £225,000 was donated to the campaign.