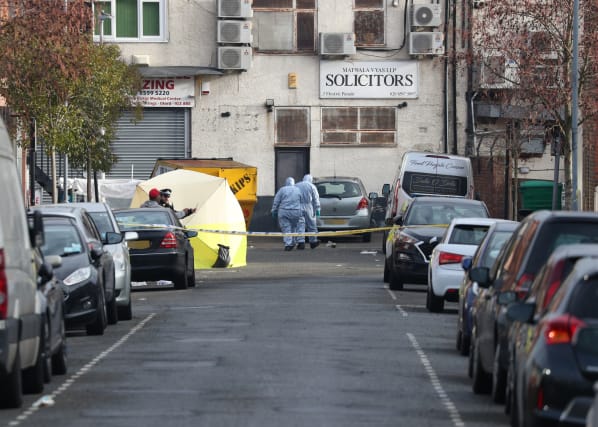 A group of men involved in a fight that left three dead may have been embroiled in an ongoing dispute, police have said.

The victims, in their late 20s and early 30s, suffered stab injuries in the violence in Ilford, east London, on Sunday evening.

All three were pronounced dead at the scene in Salisbury Road, Seven Kings.

The Metropolitan Police said they believe five men were involved in another altercation the previous evening at the nearby Krystel Banqueting venue, with the clash spilling out on to the High Road.

It is thought those involved were known to each other and were from the Sikh and Hindu communities.

Detective Chief Inspector Paul Considine, leading the investigation, said: “At this early stage, I do not believe this was gang or race-related.

“But I believe there may have been an ongoing dispute between those involved. We believe the five men were involved in an altercation the previous evening at Krystel Banqueting.

“I would encourage anyone in the local communities who knows what the motivation for this attack was, or to anyone who may have seen an altercation late on Saturday evening at Krystel Banqueting, or the incident itself on Salisbury Road, to contact us and tell us what they know.”

Witnesses described the “horrific” aftermath of Sunday night’s violence, which happened at about 7.35pm, with one describing it as “absolute chaos”.

Scaffolder Louis O’Donoghoe, 40, was watching TV when he heard screaming and shouting outside his house in what he said sounded like a foreign language.

“It was just chaos, absolute chaos. It was like something out of a movie, horrific,” said Mr O’Donoghoe.

He saw the ambulance service working on one person, and then realised there were another two bodies, at which point he went outside to see what was going on.

“I could see it all: one (body) to the left, two at the bottom of the stairs. It was like a bad day in Bosnia. It was pretty horrific really. I’ve never seen anything like it to be honest. It’s like something on a movie.”

He said his girlfriend was left “distraught” and he had come home from work early on Monday to be with her.

A wide police cordon was in place in the area near Seven Kings station throughout the day on Monday as forensics officers and police dogs worked at the scene.

The owner of Seven Kings Cars, opposite the station’s main entrance, said a man with blood on his hands had approached him on Sunday evening asking for help.

Nadeem Rana told the PA news agency: “I was shocked. He had blood on his hands and he said there were people in very poor condition.”

The man and a passenger who had been waiting for a taxi then went towards the scene, Mr Rana said.

During a visit to the area, London mayor Sadiq Khan described the incident as “shocking, horrific and scary”.

He met local residents, some of whom complained of anti-social behaviour in the area, including drug-dealing, and they called for more police on the streets.

Sukhbir Bassi, a member of the Singh Sabha Sikh temple, works with young people and told Mr Khan the east of the city is “not safe”.

Detectives are in the process of establishing formal identification and informing all next of kin.

There will be an increased police presence in the area in the coming days to provide reassurance to locals, officers said.

Two men, aged 29 and 39, were arrested on suspicion of murder on Sunday and remain in custody.