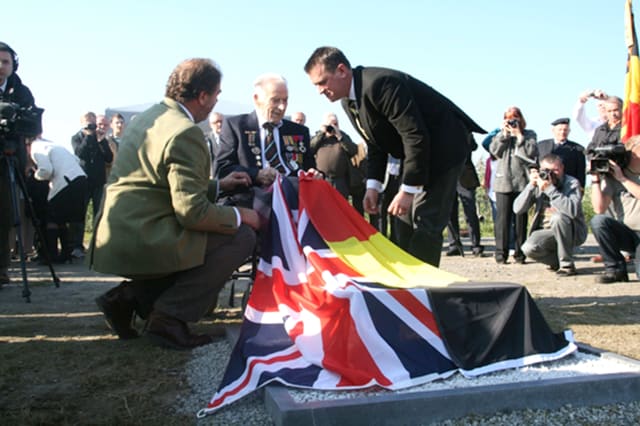 A memorial stone dedicated to Britain’s last survivor of the First World War trenches has been found, two years after it disappeared from a plinth in Belgium.

Harry Patch, who died in 2009 aged 111, was the last surviving British soldier to have fought in the conflict, and paid for the memorial stone himself.

Mr Patch, from Somerset, was present at the unveiling in 2008 at Langemarck, six miles from Ypres, where hundreds of thousands of soldiers were killed.

The stone, which marks the spot where Mr Patch went over the top, disappeared in July 2018 and its whereabouts were unknown. It was replaced following a fundraising campaign.

It remained a mystery until last month, when a Belgian lorry driver claimed to have seen a local farmer reversing his tractor into the memorial stone, and then threatening to throw it into the Steenbeek stream.

According to British military historian Jeremy Banning, the lorry driver took it away and reported it to the police, but no action was taken.

It will now go on display at Mr Vandewalle’s cafe until May, and then move to a permanent home in the garden of the Talbot House Museum in Poperinge, which is dedicated to the soldiers who served at Ypres.

Mr Banning, who lives in Bristol, said: “Unbelievably, just before Christmas I was called by Simon Louagie, from Talbot House, who told me the original memorial had turned up.

“Why did that lorry driver then wait another year or more to admit he had it? He says he took it to the police.

“It transpires he got in touch with Johan, and it was only on Sunday that this guy brought it back and gave it to Johan and Simon.

“It’s very strange. I don’t think we’ll ever quite get to the bottom of it. I think it’s one of those things we have to put down to ‘Oh well, it’s turned up now’.”

Mr Banning said the Talbot House Museum was a safe place for the memorial stone to be permanently homed.

“Talbot House was an everyman’s club set up behind the lines, a home from home, where all ranks mixed. You could have a private sat next to a major or a colonel,” he said.

“Harry went there in 1917 as a 19-year-old, went there again when he returned to the battlefields and loved the place. It has a real charm.

“He opened the new museum wing there during one of his return visits.

“They have a new exhibition opening in May. If it’s going to be anywhere that would be the best place for it.”