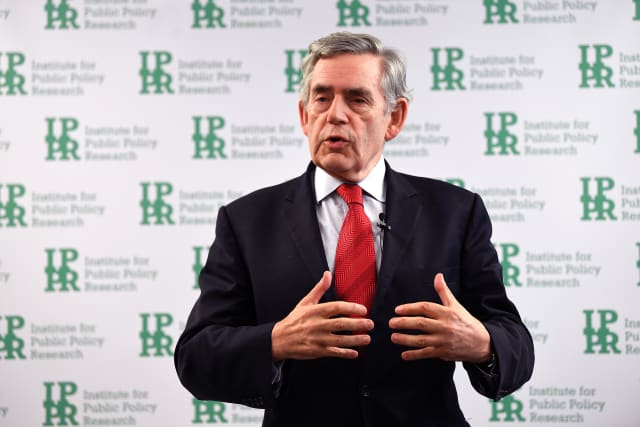 The powers of Brussels must be transferred to the UK’s regions to stop the country breaking up after Brexit, former prime minister Gordon Brown said.

The ex-Labour leader told an audience in Westminster how Boris Johnson’s slogan of “getting Brexit done” was having the impact of “leaving Britain undone”.

He said: “When you think of Brexit getting done, it is leaving Britain undone and at the same time you are destabilising the relationships between the different interests of Irishness and Britishness, and putting at risk the whole of the United Kingdom.

“The danger is we have Scotland first, England first, Wales first, and so on in the United Kingdom.”

The former chancellor added: “We have to rediscover, in my view, the value of empathy, not enmity, between nations.

“We have to rediscover the importance of cooperation and not conflict.”

Mr Brown, PM between 2007 and 2010, said one way of reversing the UK’s “over-centralised” system was not only to grant more powers to Scotland to ward off the threat of independence, but also to give greater control to English regional leaders over investment and changes in their areas.

He said he wanted to see regional citizens’ assemblies set up to examine the issues Brexit will present the country with.

“I would give it powers to look at some of the important issues that arise from Brexit,” he told those at the event organised by campaign group, Hope Not Hate.

“When you transfer powers from Brussels to Westminster, you cannot say that’s where powers should be located.

“There has to be devolution of some of these powers, otherwise Westminster and Whitehall will have even more centralisation and power than they have now.”

Mr Brown criticised the Conservative idea of moving the House of Lords out of London in a bid to connect with voters, calling it a “cosmetic” change.

Instead, he said long-term reform of the House of Lords should use his example of the regional citizen assemblies and turn it into a “senate of regions and nations” to give a stronger voice to places that feel left behind.

Councils of the North – and in any other region that wants one – made up of councillors, MPs and elected mayors, could help direct resources to where needed, Mr Brown argued.

And, if the government of the day was refusing to listen, pressure applied jointly by the regional councils would eventually be “irresistible” for ministers, he predicted.

Addressing current friction north of the border, the former Number 10 incumbent said the SNP had failed to win the argument over independence in Scotland and pushed for the UK to offer an alternative to splitting.

“There is not a decisive majority or even an overwhelming majority, as they (the SNP) would argue, for independence,” said Mr Brown.

“The danger is for Scotland is that we are caught between two positions – a no-change unionism, the status quo, and independence, which is where the nationalists want the debate to be.”

The 68-year-old said the NHS still represented an illustration of how the UK could function in a united fashion and urged Britain to rediscover that spirit.

“The idea is that in any part of the UK, irrespective of whether you’re Scottish, English, Welsh or Northern Irish, you can get access to the NHS,” said Mr Brown.

“The health service is there to treat you equally, on equal terms, irrespective of your money but dependent on your need.

“When we have blood transfusions and blood is donated by people, they don’t ask if it is going to a Scottish or Welsh or English or Irish patient.”

Mr Brown warned that unless Labour helped find a solution to Scotland’s independence threat, then a party leader was unlikely to cross the threshold of Downing Street as prime minister again.

“There cannot easily be a Labour government without Scotland in particular turning to the Labour Party,” he said.