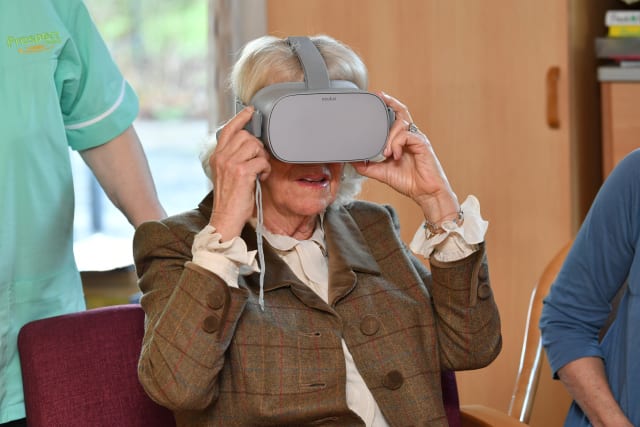 The Duchess of Cornwall described the experience of wearing a virtual reality headset as “quite extraordinary”.

Camilla was shown the technology during a visit to Prospect Hospice near Swindon, Wiltshire, on Monday.

She viewed a scene through the Forest of Serenity app, which is narrated by Sir David Attenborough.

It showed a peaceful walk through trees, with birds chirping overheard and wildlife roaming below.

After putting on the headset, Camilla said: “Quite extraordinary.

“I can see you could get addicted to this. It relaxes you, doesn’t it.”

Camilla has been president of Prospect Hospice, which is celebrating its 40th year, since August 2013.

The charity supports around 7,300 patients, carers and family members annually.

During her visit to the centre, Camilla met a bereavement group.

She said: “Everybody has experienced the same grief probably so you know exactly how everyone else feels.

“I think it is such a good idea to have group therapy to let it all out.”

Camilla then joined executive chef Rob Tynan and his staff in the centre’s kitchens, where they were preparing dinner.

Around 60 people per day eat at Prospect Hospice, with neighbours often visiting to support patients and staff.

The duchess unveiled an embroidery by the Marlborough and District Embroiderers Guild.

More than 30 women have spent four years completing the piece, which depicts flowers in the poem All These I Learnt by Robert Byron.

Camilla then cut a cake she had brought to mark 40 years of the hospice.

“I know everybody thinks you’re going to come into a hospice and its going to be a sad, depressing place but it is always the opposite,” the duchess said.

“It is uplifting and Prospect is certainly one of the most uplifting hospices I’ve been to and I’ve very proud to be its patron.”

She was presented with a Prospect rose bush by Kasie-Louise Stacey, 15, and her brother Aiden Stacey, nine.

They raised money for the charity by hand-making Christmas cards in memory of their grandmother Denella Maslen, 54, who died at the hospice in June.