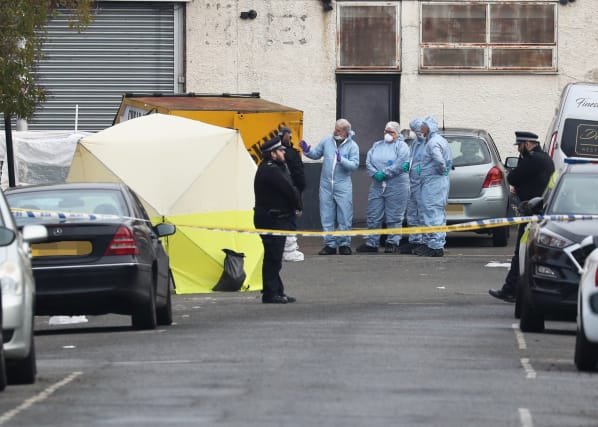 Witnesses have described the "horrific" aftermath of violence that saw three men stabbed to death in a residential street.

A fight between groups of Sikh men in Ilford, east London on Sunday evening escalated into a fatal clash, according to police.

Scaffolder Louis O'Donoghoe, 40, was watching the snooker when he heard screaming and shouting outside his house, in what he said sounded like a foreign language.

"It was just chaos, absolute chaos. It was like something out of a movie, horrific," Mr O'Donoghoe, who is originally from Middlesbrough, said of the aftermath.

He saw the ambulance service working on one person, and then realised there were another two bodies, at which point he went outside to see what was going on.

"I could see it all, one (body) to the left, two at the bottom of the stairs. It was like a bad day in Bosnia. It was pretty horrific really. I've never seen anything like it to be honest. It's like something on a movie."

He said his girlfriend was left "distraught" by what happened, and he had come home from work early to be with her.

Police responded to reports of a disturbance in Elmstead Road, Seven Kings, in Ilford, on Sunday at 7.38pm.

All three men were pronounced dead at the scene and the Metropolitan Police said the victims are believed to be aged in their 20s or 30s.

Two men, aged 29 and 39, have been arrested on suspicion of murder.

Speaking at the scene on Monday, Chief Superintendent Stephen Clayman said the suspects and the victims were all known to each other.

"We believe the groups involved are members of the Sikh community," he said.

He added in a later statement: "A fight has taken place which has escalated, resulting in three people being fatally attacked."

Officers are still contacting members of the deceased men's families, he said.

"It was a horrific scene for anyone to come across and my heart goes out to the families and those affected by it, because it is unprecedented to have something like this," he said.

While they are still investigating a motive, police have ruled out terrorism, he said.

A police cordon was in place outside Seven Kings railway station on Monday morning.

The owner of Seven Kings Cars opposite the station, said a man with blood on his hands had approached him on Sunday evening asking for help, after three people had been badly injured.

Nadeem Rana told the PA news agency: "I was shocked. He had blood on his hands and he said there were people in very poor condition."

The man and a passenger who had been waiting for a taxi made off towards the scene to help, Mr Rana said.

He said he was shocked to hear the men had died.

"It's shocking, a feeling of insecurity to be honest," he said.

Local resident Lauren Marshall said she and other neighbours had gone to Elmstead Road when they saw flashing police lights on Sunday night.

"By the time I came out, the road was blocked and there were police everywhere. It was manic. Everyone was coming out of their houses," the 26-year-old paralegal told PA.

"I've lived here my whole life and nothing like this has ever happened. It was a shock."

A police forensics tent was visible in Salisbury Road, near what Ms Marshall said was the stairway to the railway station.

Formal identification of the victims has yet to take place, and post-mortem examinations have also yet to be arranged.

Jas Athwal, leader of Redbridge Council, said he believed it was an isolated incident.

"An incident like this is unheard of within the Sikh community here in Redbridge," he said.

"I think tragically there are at least three families who are going to be in mourning and this is going to last a lifetime for the people left behind.

"We've got to look at the causes of why this happened and address those."

He was critical of bloody footage shared on social media appearing to show the aftermath of the killings.

"I think the first response should be 'What can we do to help?'. To put it on social media is not right."