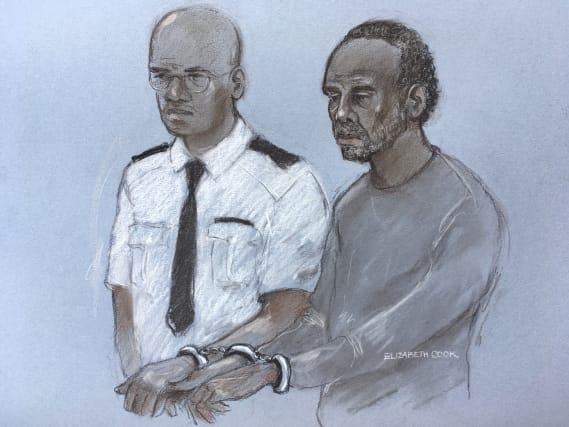 A white van driver accused of a machete attack on a police officer has told jurors he got cross because he was “always being stopped”.

Handyman Muhammad Rodwan, 56, lashed out with a 2ft rusty blade after Pc Stuart Outten pulled him over for having no insurance, the Old Bailey has heard.

The Metropolitan Police officer, 29, suffered six deep wounds to the head, exposing his skull, but still managed to Taser Rodwan, jurors have heard.

Following his arrest, Rodwan, who had smoked weed earlier that day, appeared “angry” and “obstructive”, the court heard.

He told police: “This officer attacked myself and I defended myself,” and on being charged with attempted murder, added: “My life is worth more than his life.”

The court heard Rodwan received cuts and bruises during the incident on the night of August 7 last year, and lost seven of his dreadlocks.

Giving evidence in his trial, Rodwan said he had been living in his van where he kept all his possessions, including work tools, sleeping bag and quilt.

He used a tyre as a makeshift table, his toolbox as a seat and kept a knife for cutting cheese, the court heard.

Earlier on the day of the incident, he had used his machete while doing a gardening job in Gospel Oak, he said.

When he first noticed the police blue lights in Leyton, east London, just before 11pm, he pulled to the curb, not thinking it was for him, the court heard.

But when he moved away and the police van followed, he realised “it was not somebody else, it’s me”, and stopped at the roadside, he said.

Jurors were shown police body-worn camera footage in which Rodwan could be heard to ask: “Are you going to knock me down? What do you want?”

Defence barrister Michael Turner QC said: “You appear to be agitated, cross, whatever. Why was that?”

Rodwan replied: “Because I’m always being stopped. So it’s one of those things, what do you want now?”

The defendant said he was not aware at the time that the insurance on his van had expired 12 days before.

In the police footage, the defendant was instructed by police not to drive away.

Asked what he had been intending to do, Rodwan said: “Drive away, drive away. Because I thought it’s just one of those circumstances where it was nothing again.”

Rodwan, from Luton, has denied attempted murder, an alternative charge of wounding with intent and possession of an offensive weapon.