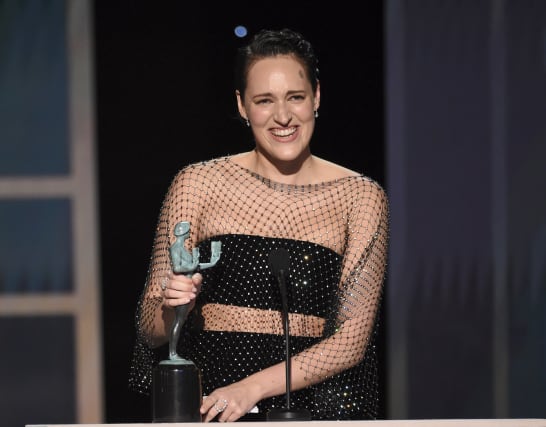 Phoebe Waller-Bridge was in illustrious company at the Screen Actors Guild Awards where she won alongside a host of Hollywood’s biggest stars.

The creator and star of Fleabag took home yet another prize for her work on the acclaimed comedy’s second season, adding to her Golden Globes, Critics’ Choice Awards and Emmy wins.

In the film categories, Joaquin Phoenix boosted his Oscars credentials with a best actor win for his portrayal of a troubled loner in Joker, while Renee Zellweger did likewise by winning best actress for Judy.

The top prize of the night, outstanding cast in a motion picture, went to South Korean dark comedy Parasite, which is now a firm contender for best picture at the Academy Awards.

It was somewhat of a surprise winner, beating well-fancied heavyweights including Once Upon A Time… In Hollywood, The Irishman and Bombshell.

Former husband and wife Brad Pitt and Jennifer Aniston were both among the winners while The Irishman’s Robert De Niro was honoured with a lifetime achievement award.

The SAG Awards, celebrating both TV and film, are voted for by actors, with the event one of the final major ceremonies before the Academy Awards.

Waller-Bridge won for outstanding female actor in a comedy series gong for Fleabag.

Accepting her prize, she said: “At some point, it will all hit me and I will have a good old cry about it.

“Tonight as a Fleabag gang, we will soak this up… in a room I never imagined I would be in.

“This whole thing really has been a dream and if I wake up tomorrow and discover it has been just that, then thank you, it has been the most beautiful dream.”

In a shock upset, Fleabag missed out on the best comedy series prize to Amazon stablemate The Marvellous Mrs Maisel.

Maisel star Alex Borstein admitted to being stunned by the win and said she voted for Fleabag.

Pitt, 56, continued his awards season hot streak when picking up the outstanding supporting actor prize for his portrayal of an ageing stuntman in Quentin Tarantino’s Once Upon A Time… In Hollywood.

Taking to the stage, the star joked it was time to update his online dating profile.

“I’ve got to add this to my Tinder profile,” he said.

His ex-wife and fellow A-lister Aniston won the female actor in a drama series prize for The Morning Show, her first SAG since she starred in Friends.

“What? Oh my gosh, this is so unbelievable, what a room,” she said, after beating British trio Helena Bonham Carter, Olivia Colman and Jodie Comer.

Aniston paid tribute to her co-star Reese Witherspoon, saying: “It took 20 years but we did it, finally.”

The star-studded audience inside the Shrine Auditorium in Los Angeles rose to salute De Niro after Leonardo DiCaprio delivered a glowing tribute.

Two-time Oscar winner De Niro said: “As actors, we don’t take victory laps, we are too worried about what our next job will be, so it makes me very happy to know my next job is working with you and Marty (Scorsese), at least I know I’ve got another year of health insurance.”

The 76-year-old, a high-profile critic of Donald Trump, also referred to “such a dire” political situation that was “so deeply concerning to me and others that I have to say something”.

Peter Dinklage won outstanding performance by a male actor in a drama series for his Game Of Thrones swansong.

The Crown won the prize for outstanding performance by an ensemble in a drama series, beating Game Of Thrones, Big Little Lies, The Handmaid’s Tale and Stranger Things.

Fleabag’s Andrew Scott missed out on a win.

Scott, who plays the “hot priest” in the BBC show, was beaten by Maisel’s Tony Shalhoub in the male actor in a comedy series category.

Shalhoub dedicated the win to his late co-star Brian Tarantina, who died in November.