Boris Johnson will raise concerns over the driving of US diplomatic staff at a world leaders' summit after footage emerged of a near-miss close to the base where Harry Dunn was killed.

The Prime Minister is in Berlin with world leaders including US Secretary of State Mike Pompeo, at the summit hosted by German Chancellor Angela Merkel.

Speaking to Sky News, Mr Johnson said he will address with Mr Pompeo the driving habits of US staff at RAF Croughton following the death of the teenager.

He said: "We're certainly raising all those issues, about the driving habits of US personnel at the base, and we're continuing to work for justice for Harry Dunn and for his family."

RAF Croughton became the focus of an international controversy after Mr Dunn was killed in a head-on collision with a car on August 27 last year. 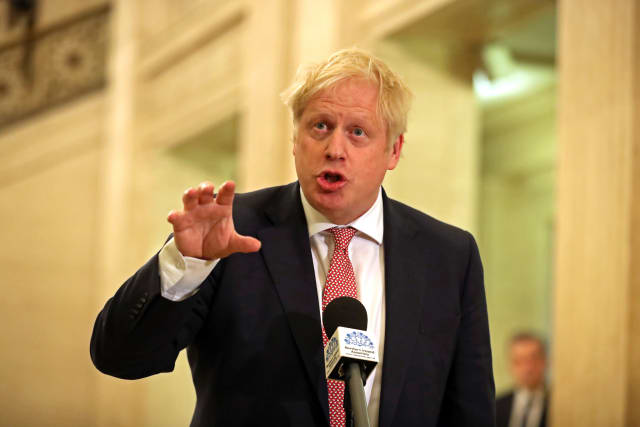 Anne Sacoolas, 42, the wife of a US intelligence official, is believed to have been driving on the wrong side of the road and was charged with causing death by dangerous driving.

But she controversially claimed diplomatic immunity after the collision, fled to her home country and has refused to return to face justice despite pleas from Harry's family.

The US State Department has said the UK extradition request for Sacoolas is highly inappropriate and would be an abuse.

Mr Johnson's statement comes after footage emerged of a suspected US government car having to brake sharply on a country road near the base.

The footage of the near-miss close to RAF Croughton was released as police revealed details of a separate incident in which a police vehicle was struck by a car being driven on the wrong side of the road in October.

The video, reported to Northamptonshire Police on Saturday, shows the blue BMW has what appears to be one of the registration numbers used on US government vehicles in the UK.

In a statement, Northamptonshire Chief Constable Nick Adderley said: "I do not underestimate how much of a concerning incident this was and how much worse it could have been, especially considering the circumstances in which 19-year-old Harry Dunn tragically died."

The Prime Minister previously said that it was right to appeal for extradition but said the chances of Anne Sacoolas returning were "very low".

"That's not what they do," Mr Johnson said, sparking criticism from Mr Dunn's family who later said the Prime Minister had no intention to meet them.