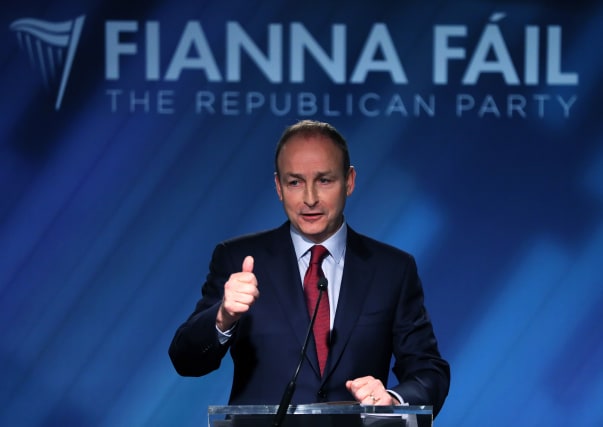 The leader of Fianna Fail has said Irish people do not respond well to negative campaigning as his party opened up a 12-point lead on rivals Fine Gael.

The Sunday Times/Behaviour and Attitudes opinion poll published on Saturday night shows Fianna Fail’s support has increased by five points to 32%, while Fine Gael has dropped by seven points to 20% – the party’s lowest standing in the survey.

Further polls will be published this week, with the election to take place on Saturday February 8.

Speaking to reporters in Dublin on Sunday, Micheal Martin urged caution over the poll and said it will be a tight race between the two parties.

“I have to stress, all our experience tells us from previous campaigns that it’s in the last week people make up their mind.

“There is going to be a lot of assessment and debate in the coming weeks but it is very early days yet. Polls will fluctuate.”

He added: “I think polls should be treated with a certain degree of caution.

“I believe the gap between Fianna Fail and Fine Gael is much tighter.

“Different polling companies produce different results and we know from our research that, generally speaking, people actually make up their mind in the last week of a campaign.”

Fine Gael was accused of negative campaigning after it released a video on Twitter with people wearing masks of Fianna Fail ministers running around Dublin searching for policies, set to Benny Hill Music.

The video was deleted, with Taoiseach Leo Varadkar saying on Saturday the video set out to highlight Fianna Fail’s lack of policies in a light-hearted way but admitted people thought it was silly.

“There has been a lot of negative campaigning by Fine Gael , they would engage in this campaign in a negative way,” Mr Martin said.

Meanwhile, Mr Varadkar told reporters in Dublin on Sunday that “a week is a long time in politics”.

He has sought to place Fine Gael’s role in negotiating Brexit at the heart of their campaign but it appears to have fallen flat with voters after he said they are not discussing Brexit with him on the doors.

Mr Varadkar said: “We know what happens every time Fianna Fail gets into power – it ends badly.

“It ends with boom and a bust and unemployment, and ends with us having to wave our friends off as they emigrate.

“It would also mean that our Brexit team of Simon Coveney and Helen McEntee would no longer be representing Ireland as we reach a crucial stage in the Brexit talks when it comes to securing a trade deal with the UK.

“That would be really bad news for rural Ireland, for the economy and for jobs.”