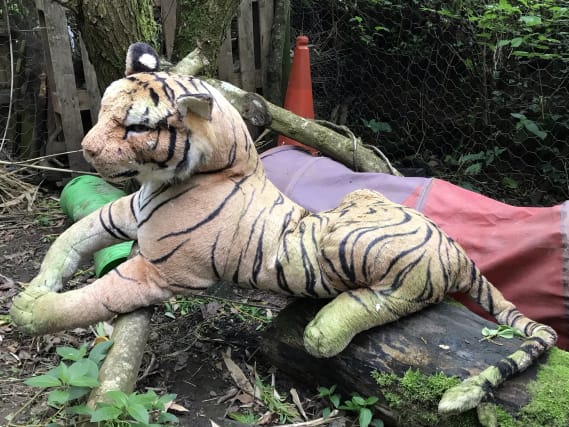 A caged tiger that turned out to be a stuffed toy is just one of the strangest calls the RSPCA responded to last year.

The animal welfare charity – which responds to 1.1 million calls and rescues more than 110,000 animals each year – has revealed some of the jobs its officers were sent to in 2019.

On May 10, officers received a call about a tiger being kept in a cramped cage in a garden in Exeter.

“They were persistent this is what they’d seen and I wasn’t quite sure what to expect but soon realised that it wasn’t a tiger at all, it was just a soft toy,” RSPCA inspector Marije Zwager said.

“He’s called Tiddles the Tiger and shares his home with two male neutered rabbits called Horace and Boris, who have a fantastic home filled with all kinds of enrichment and entertainment to keep them happy and healthy.”

A local resident in Exeter, Devon, raised the alarm on April 8 after becoming concerned with a fox hiding under a bush in the area, which was described as “lethargic and collapsed in the undergrowth”.

When the RSPCA’s Ellie Burt arrived she realised the fox was, in fact, stuffed.

“He’d clearly been placed under a bush outside of the houses as a prank,” she said.

“After speaking to some of the neighbours, I soon discovered that someone had been moving it around the neighbourhood.”

Another inspector drove 55 miles to Shrewsbury on January 5 after a report of a baby owl trapped on a roof.

“The baby owl turned out to be a statue,” Cara Gibbon said.

“I was really pleased that the little chap didn’t need rescuing but we’d always encourage people to chat to their neighbours and double-check they need our help before calling in.”

An abandoned brown snake in Shildon, County Durham, was the job for Ron Crawford on December 11.

But the serpent was soon revealed to be a rubber toy that had been left on top of a wheelie bin.

“The caller had managed to secure it in a plastic tub before calling us,” Mr Crawford added.

On March 22 in Bilston, West Midlands, inspector Paul Seddon responded to news of a salamander on a second-floor apartment balcony, which the caller was too afraid to approach due to the apparent lizard.

“It was a soft toy complete with labels … I borrowed a brush to knock it off on to the ground so I could pick it up,” Mr Seddon said.

In Pencoed, Wales on August 31 Ellie West was called out to a report of a snake in a garden only to discover it was actually an elephant hawk-moth caterpillar.

“They’re really interesting animals that can inflate their front end and have circular dots along their body, so they’re easily mistaken for snakes,” she said.

“We’re very grateful to the caller, who thought they were helping a non-native loose snake.

“Instead, however, this caterpillar was returned to the wild, and can look forward to transforming into a beautiful moth.”