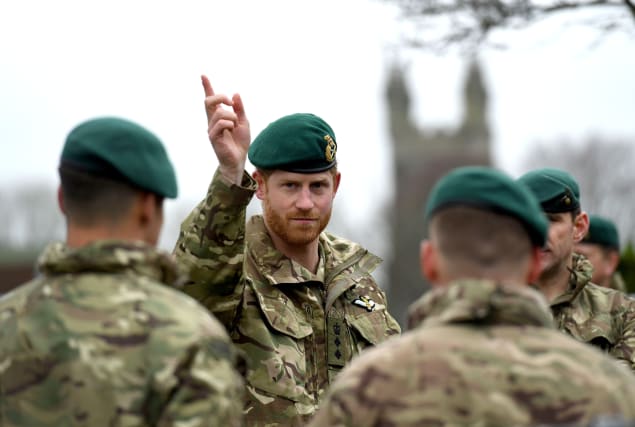 The Duke of Sussex fought in Afghanistan on the frontline, but is now severing his official ties to the military as he quits royal life completely.

Harry spent 10 years in the forces, and once said how his experience in the Army would stay with him for the rest of his life.

“The whole situation is extremely sad and I think it is unfortunate, after his splendid service in the military, that he will now no longer be involved with the military in the UK,” he told ITV News.

When Harry left the Army in 2015, he vowed to always maintain his links with his fellow servicemen and women.

“Luckily for me, I will continue to wear the uniform and mix with fellow servicemen and women for the rest of my life, helping where I can,” he said.

He took over from his grandfather, the Duke of Edinburgh, as Captain General of the Royal Marines in 2017 – but now is stepping down after just two years and one month in the position.

Philip, who retired at the age of 96, spent more than 64 years in the role.

Harry will also no longer be Honorary Air Force Commandant of the Royal Air Force Base Honington, and Honorary Commodore-in-Chief of the Royal Naval Commands’ Small Ships and Diving.

The Queen is head of the Armed Forces, and military appointments form part of official duties, meaning Harry could not continue them as he walks away from royal life.

He will undoubtedly keep in touch with the comrades he trained and served with, and he is continuing his work with the Invictus Games, the competition he set up for sick, injured and wounded servicemen and women.

Harry had always dreamed of a life in the Army – and his honorary military appointments will have been important to him.

As a child, his bedroom was filled with pictures of tanks and helicopters and in 1993, as an eight-year-old, he was clearly in his element when dressed up in a miniature combat suit and helmet to ride in a tank on a visit to Germany.

He joined the Royal Military Academy Sandhurst in 2005, and trained as an Army officer, then joined the Blues and Royals and went on to train to become a Troop Leader of an armoured reconnaissance unit.

A planned tour to Iraq was scrapped after it was found he was to be a target for insurgents, but two tours to Afghanistan followed including one as an Apache helicopter pilot.

It was the Army which offered Harry his first taste of life away from being a royal.

He admitted after serving in Afghanistan for a second time in 2012 that he was more comfortable being Captain Wales than Prince Harry.

“I’ve always been like that. My father’s always trying to remind me about who I am and stuff like that,” he said. “But it’s very easy to forget about who I am when I am in the Army.”