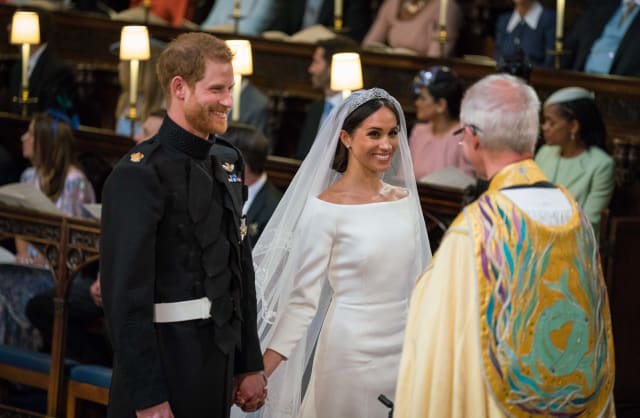 The change will take effect in the spring as the couple will no longer be working royals.

Although they will not use their HRHs, they will still retain them.

Harry, who was born a prince of Wales, remains a prince. He has been styled an HRH since birth.

He was given the title the Duke of Sussex by his grandmother the Queen on the morning of his wedding.

Buckingham Palace said in a statement on Saturday: “The Sussexes will not use their HRH titles as they are no longer working members of the Royal Family.”

In the Queen’s statement sanctioning their new life earlier this week, the monarch referred to the couple not at first by their official titles.

This was taken as the first clue as to what might be in store, with commentators questioning whether there is the prospect of the couple losing their HRH style – and even their royal titles.

Their son, Archie Mountbatten-Windsor, is not an HRH – nor a prince – as he is too far down the line of succession from the monarch.

Harry and Meghan could have used the courtesy title Earl of Dumbarton for him, or he was entitled to be Lord Archie Mountbatten-Windsor.

But they took the personal decision to make him a plain Master, most likely inspired by Harry’s wish to have been a normal child, rather than a prince, as he grew up.

Archie will, however, be entitled to be HRH and a prince when the Prince of Wales accedes to the throne – although Harry and Meghan almost certainly will not opt for this now.

The abdicated Edward VIII became the Duke of Windsor and finally married American divorcee Wallis Simpson while in exile in France in 1937, and none of the royal family attended.

But he kept his HRH style.

A Letters Patent by his brother, the new King George VI, decreed that Edward “having been born in the lineal succession to the Crown” should be “entitled to hold and enjoy for himself only the style title or attribute of Royal Highness”.

Mrs Simpson became the Duchess of Windsor, but was never permitted to adopt the style of an HRH, with George VI’s Letters Patent forbidding it.