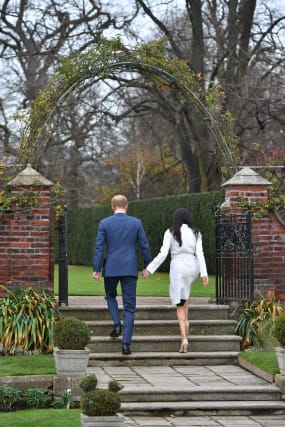 Here’s a look at the Duke and Duchess of Sussex in numbers:

2 – less working royals in the royal family. Harry and Meghan are bowing out of royal life completely.

2 – Homes in Canada and the UK – but they will spend most of their time in Canada.

2 – Legal Actions – Harry and Meghan have two on-going legal actions against the press.

3 – Military appointments Harry is quitting. He will no longer be Captain General of the Royal Marines, Honorary Air Force Commandant of the Royal Air Force Base Honington, and Honorary Commodore-in-Chief of the Royal Naval Commands’ Small Ships and Diving.

4 – Meghan’s royal patronages which will become her private ones: Smart Works, Association of Commonwealth Universities, the National Theatre, and animal charity Mayhew.

6 weeks – How long the couple and Archie spent in Canada over the festive period.

6 – Harry is still sixth in line to the throne.

14 – Patronages, presidencies and associations Harry will keep, including Sentebale, the Invictus Games Foundation, and the Queen’s Commonwealth Trust.  He will no longer be the Commonwealth Youth Ambassador.

16 months – How long Harry and Meghan dated before they got engaged.

16  months – How long the joint Royal Foundation venture with the Duke and Duchess of Cambridge lasted after their first appearance as a foursome.

20 months – or 610 days -The time Meghan has spent as a royal since her wedding to Harry when she became HRH the Duchess of Sussex.

35 – Harry’s age – the length of time he has been an HRH, which he will no longer use from the spring.

£2.4 million – How much taxpayers’ money the Sussexes will pay back to cover renovations at Frogmore Cottage, plus any additional costs not yet disclosed.

Between £2 million and £4 million – the cost of policing the duke and duchess’ wedding with around 5,000 officers on the day.

£5.05 million – The Prince of Wales’s bill in 2018-19 for the Sussexes’ and the Cambridges’ public duties activities, plus other expenditure including Charles’s capital expenditure and transfer to reserves. Charles will continue to offer private financial support to the couple.

10.8 million – the amount of followers on their official SussexRoyal Instagram page.