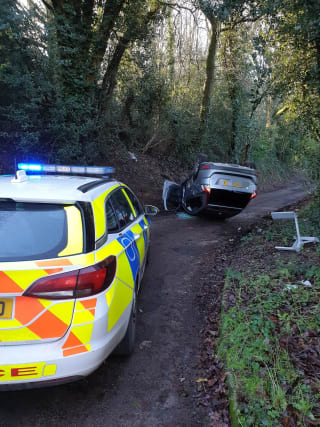 Police have urged drivers not to leave their vehicles to defrost after an unattended car was stolen in Hertfordshire.

The vehicle was taken after it was left with its engine running on a driveway in Hemel Hempstead on Saturday morning.

It was later found on its roof after crashing nearby. Hertfordshire Police said a suspect was detained at the scene.

Frost was an issue for many across the UK on Saturday, with plunging temperatures predicted to dip as low as -6C (21.2F) for some areas overnight.

A cold weather alert has been issued by Public Health England (PHE) from 6pm on Sunday to 6pm on Tuesday, and the organisation is urging people to prepare for cold weather conditions and look out for those most at risk.

Dr Owen Landeg, principal environmental public health scientist at PHE, said: “Below 18 degrees, changes to the body mean that the risk of strokes, heart attacks and chest infections increase so heating homes to this temperature is particularly important to stay well.”

Met Office forecaster Mark Wilson said: “The South West of England could see -2C (28.4F) locally on Saturday (evening), while the West and East Midlands will experience temperatures as low as -3C (26.6F).

The cold snap comes after Storm Brendan swept across parts of the UK last weekend, causing road closures and rail disruption, as well as gales of up to 80mph.