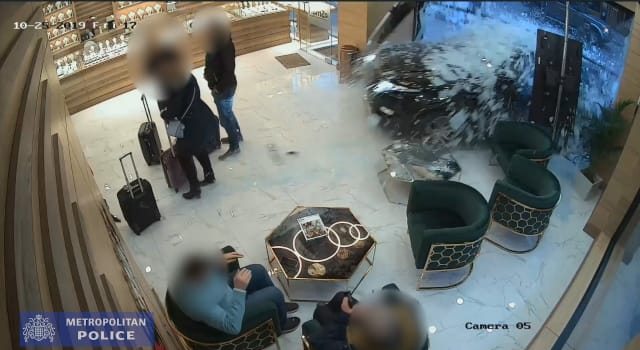 A man who was detained by shoppers moments after ransacking a west London jewellers has been jailed for 10 years.

Ben Wegener, 34, and two accomplices drove a black Range Rover through the front of a jewellery store in Shepherd's Bush, smashing the windows and narrowly avoiding shoppers inside.

Armed with a sledgehammer and a hammer, the robbers smashed glass display cases before putting jewellery into bags.

But as Wegener attempted to flee, members of the public outside the shop detained him until police arrived minutes later.

Wegener, of no fixed address, was subsequently arrested and charged by officers.

The robbery took place at a jewellers on Uxbridge Road at about 5.20pm on October 25 last year, the Metropolitan Police said.

Wegener pleaded guilty to robbery, dangerous driving, possession of an offensive weapon, criminal damage and receiving stolen goods at a hearing on November 26.

He was jailed for 10 years at Isleworth Crown Court on Thursday for the offences, the Met said.

The Range Rover used in the robbery was recovered by police and found to have been stolen from a property in Wandsworth, south west London, earlier in October.

It had been fitted with false number plates.

Detective Constable Sam Weller, who led the investigation, said: "This was a reckless robbery committed in front of shoppers on a busy high street.

"It was sheer luck that no-one was seriously injured when the vehicle smashed through the shop front, and the shop owner and customers were threatened with serious violence when the robbers were inside.

"This was a terrifying incident for the victims and everyone who witnessed it unfold, and Wegener will now spend a significant period of time in jail."

DC Weller said Wegener's two accomplices have not yet been caught.