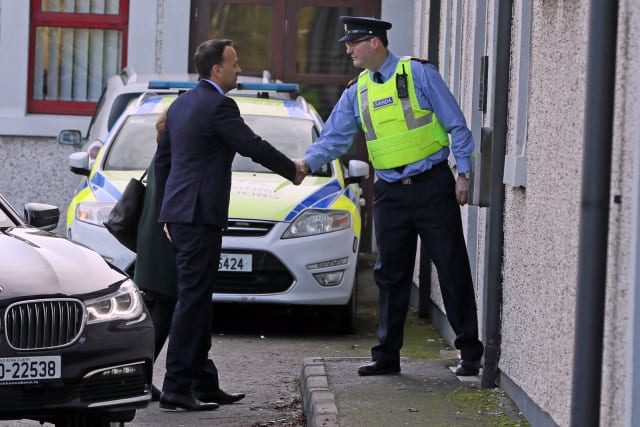 The Irish General Election has pivoted to focus on gangland crime as the murder of a young teenager was labelled a “turning point”.

The teenager was murdered and his body was dismembered and left in various locations in Dublin.

Mr Varadkar spoke to gardai in Drogheda who are investigating an ongoing feud between two criminal gangs which Gardai believe is linked to the murder.

Speaking to reporters on Friday morning, Mr Varadkar said: “I want to express my revulsion and condemnation of the very serious crime that has taken place here and also to assure the people of Drogheda that the Government is 100% behind them and that we are going to get these people behind bars.

“I want to say to people across Ireland and here in Drogheda that crime doesn’t pay, we will get these people behind bars and make this town safe again.

Mr Varadkar said, if Fine Gael it re-elected, it would set up a taskforce similar to one set up in the north inner city in Dublin to tackle organised crime.

“We have really helped to improve things in that part of Dublin city and helped to tackle disadvantage and to show young people that there is an alternative to a life of crime.

“That has not help solve things in the north inner city by any means but I do think it has made a difference and if re-elected, I would like to maybe expand that to different parts of the country and I think Drogheda should be one of them,” he said.

Fianna Fail likewise has promised to strengthen current legislation in order to put suspected gangland figures behind bars, by expanding Section 71A and 71B of the Criminal Justice Act.

“I do think it is a turning point, sometimes there are crimes that are so horrific, that outrage people so much, that they give rise to a turn in public sentiment, and more importantly political activity,” candidate Jim O’Callaghan said.

“It happened with the murder of (journalist) Veronica Guerin (in 1996), and people are so horrified by the brutality of this crime that I believe that there is going to be a turning point, but we can’t expect people on their own to do this, it is leaders in this country who have to stand up to these thugs, and we need to strength our gangland laws to take them on because in the past nine years there have not been any laws introduced to confront gangland crime.”

Mr O’Callaghan suggests that gangland figures should be treated in a similar fashion as suspected members of the Provisional IRA, by expanding existing legislation to “enable Gardai to bring prosecutions on the grounds if there is a belief of the chief superintendent (of membership of an illegal organisation) (it can) be used a form as admissable evidence”.

“Traditionally, when it came to membership cases, people could be convicted based on the belief of a chief superintendent and why it was introduced was because it was so difficult to get people to give evidence and we’re dealing with a similar situation now, and we need to confront it, and use our primary weapon which is legislation,” he said.

Early on Friday afternoon, a shooting was reported in the Ballymun area of Dublin, which People Before Profit says show “a complete failure to address some of the real problems that exist in many parts of our country, particularly in working class communities”.

“We are failing our young people, we’re not putting the resources into (them) at the very earliest age in school, in communities to provide alternatives and supports that will help divert young people away from criminality and we would also point out that the shocking inequalities in wealth in a society that is constantly blitzing young people with the idea that money can buy you happiness is very corrosive for the well-being of young people,” the group’s Richard Boyd Barrett said.

“The war on drugs which is obviously strongly linked to all of this has failed, the law and order approach has failed.

“We need to start to acknowledge that that’s not to say decriminalisation is a panacea, but unless we begin to recognise this as a reality in this country, face that reality and then begin to try and offer alternatives to young people putting the resources into treatment and helping people with abuse issues of mental health where there’s massive under resourcing, this problem is not going to go away.”

The Mayor of Drogheda has said he will hold a rally in the town next Saturday for people to voice their concerns about the ongoing feud and the murder of Keane.

Mr Varadkar has told reporters in Drogheda he will attend the rally if his schedule allows.