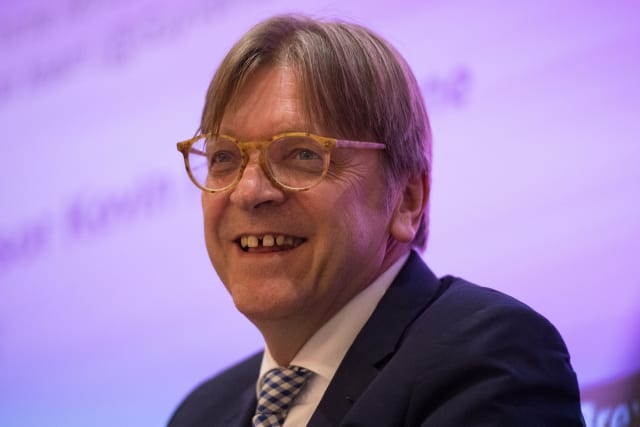 A free trade agreement will be “very difficult” to secure if Britain does not sign up to honouring Brussels’ rules on standards, according to Guy Verhofstadt.

The European Parliament’s Brexit co-ordinator said the scope of a trade deal during the upcoming negotiations would depend on Boris Johnson’s “willingness to comply with a number of standards of the European Union”.

The Prime Minister has previously ruled out following stipulations set by the EU after the transition period is over at the end of 2020.

“But how far this will go is very difficult to say because it will depend on what the willingness is of the UK side to also comply with a number of standards in the European Union.

Asked what would happen if Britain does not sign up to such stipulations, he said: “It will be very difficult to have a broad free trade agreement at that moment.”

Mr Verhofstadt was in London this week for meetings with ministers, including Brexit Secretary Stephen Barclay who he met on Thursday.

He said one of the successes from the conversations was that those European citizens who had been granted settled status in the UK after Brexit would be given the ability to print out their confirmation details as proof.

Mr Verhofstadt, chairman of the EU’s Brexit Steering Group, said there would be “pressure” being placed on member states who had yet to get their own provisions in order.

Speaking to the BBC, he said he agreed with Labour MEP Seb Dance, who argued that the UK was taking a “sabbatical” from the EU and would be back in the future.

“I think that will happen, yes, (but) it’s difficult to say when,” said Mr Verhofstadt.

“There will be a generation, the young generation coming in the coming decades, who will say later, ‘We want to go back’.

But Conservative MEP Daniel Hannan said he disagreed with the prediction – and said he would be willing to put it to the test in the years to come.

“Maybe I’m wrong,” said the Brexiteer, after disagreeing with the assertion on the Today programme.

“I’m perfectly happy to have another referendum in a generation’s time and let people decide.”