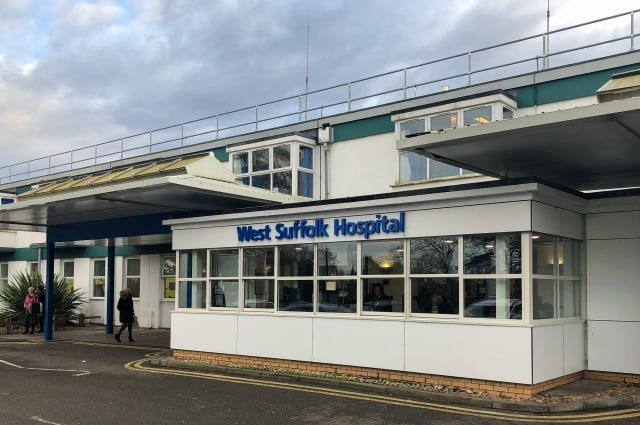 A former police officer whose wife died five weeks after bowel surgery said he was “knocked sideways completely” when he received an anonymous letter highlighting blunders in her treatment.

The 57-year-old was admitted to hospital after she collapsed at home on July 26 2018 after complaining of abdominal pain, vomiting and diarrhoea for around a fortnight.

An inquest into the mother-of-two’s death began on Thursday and was adjourned on Friday for an independent expert witness to review Mrs Warby’s medical records and prepare a report.

Speaking after Friday’s adjournment, Mr Warby told reporters how he received an anonymous letter in October 2018.

He said it arrived at the family home in Bury St Edmunds by first class post, adding: “It knocked me sideways completely.”

Doctors at the hospital were reportedly asked for fingerprints as part of the hospital’s investigation into the letter, though this was not discussed at the inquest.

An official from trade union Unison, speaking before the inquest, described the investigation as a “witch hunt” designed to identify the whistleblower who revealed the blunders.

Mr Warby said of the hospital’s reported actions: “I’m quite surprised the lengths they went to but it’s part of a criminal investigation as well so I can understand that to a degree.”

The inquest in Ipswich heard that both Suffolk Police and the hospital launched investigations into the letter at the request of the coroner and they confirmed issues around an arterial line fitted to Mrs Warby during surgery.

The hospital said that an investigation into the nature of Mrs Warby’s care was already under way at this point.

Suffolk’s senior coroner Nigel Parsley said on Friday that Mrs Warby’s family acknowledged that her death was the “progression of a naturally occurring disease” but wanted to know if “errors may have had a contributory effect”.

The family requested that an expert witness be appointed to review Mrs Warby’s medical records and prepare a report, Mr Parsley said.

He said that an expert could provide an opinion on “what, if any” effect the errors in Mrs Warby’s treatment had on her health.

After considering submissions from lawyers, Mr Parsley said: “I’ve decided this is not an unreasonable request.

“An expert witness will be appointed to conduct a review of the medical records and I will request that the witness does this as expediently as possible.”

He adjourned the inquest to a date to be fixed, adding that it would take two or three months for the preparation of the report.

In a statement read to the inquest, Mr Warby said he was told at the hospital that his wife was incorrectly given glucose instead of saline through an arterial line.

“I asked what the effect of this could be and the consultant told me brain damage or death,” he said, adding that he was later told there was “no new irreversible brain damage”.

Mrs Warby’s medical cause of death was recorded as multi-organ failure, with contributory causes including septicaemia, pneumonia and perforated diverticular disease, affecting the bowel.

In a statement issued after the inquest hearing, Mr Warby said: “This has been a highly distressing time for all of our family, and we have been left devastated by Sue’s death.

“Transparency is important in maintaining confidence in the NHS and upholding patient safety, and hospital staff should feel able to speak out on any issues they identify in the workplace.

“I was notified of errors in Sue’s care quickly after they occurred, under the hospital’s duty of candour obligations.

“When Sue died, however, we were left wanting answers.

He said it had been “incredibly difficult to relive everything” at the inquest, adding that it “brought to light important information” about how the errors occurred.

“Sadly, questions still remain about whether Sue could have survived if these errors had not been made, and I will continue to seek answers in relation to this,” he said.

“The one positive to come out of all of this is the changes that have been put in place to protect future patients and prevent future incidents.

“Nobody should have to go through what we have all been through.”