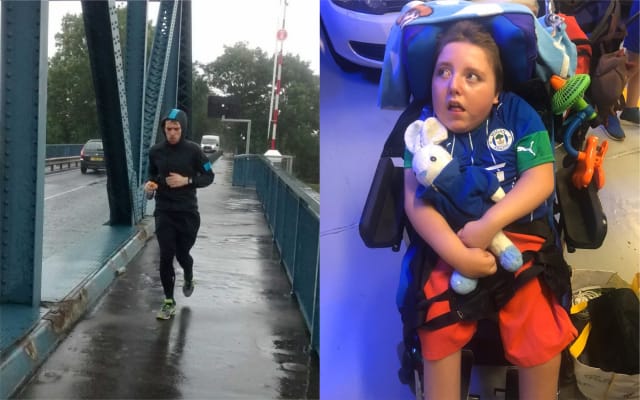 An amateur runner is aiming to raise thousands of pounds for charity by tackling one marathon for every football game Wigan Athletic win this season.

The charity has developed good links with both Championship side Wigan and the town’s rugby league team, Wigan Warriors, over the years.

Mr Devine told the PA news agency: “Joe was the mascot when Wigan won the FA Cup in 2013 so that was big for the charity, it did a great deal in terms of raising people’s awareness of it. It’s something that’s very well known in Wigan.

“So I came up with the idea of doing a marathon for every Wigan win in the Championship this season and doing them all in the month of June.”

Having set his challenge at the start of the season, Mr Devine had no clear idea of how many 26-mile runs he would be taking on come June.

The club won 13 Championship games last season so he assumed they would end up with a similar number this time around – an amount he felt reasonably comfortable with having run five marathons in five days for the same charity in 2016.

They have won five so far this season.

The challenge has meant some mixed emotions following the team’s results, from praying for them to slow down when they won two in three back in October, to begging for a victory in the long winless run that followed.

“When they won (on New Year’s Day) to get to five, I was happy that they won because they’d been stuck on four for two-and-a-bit months,” he said.

“And having said I’m going to do this, I wouldn’t want them only to win five or six games.

Adding further to the competing emotions is the fact that Mr Devine is a Stoke fan, with his team currently sitting just two places above Wigan at the wrong end of the table.

“I’m hoping they both stay up and it’s not an issue,” he said.

“But obviously if we get into the last few weeks of the season and it could quite conceivably be Stoke and Wigan where one stays up and one doesn’t, then that could make things complicated.”

Mr Devine, a production editor at Stats Perform, has not set a fundraising target, but hopes to raise thousands of pounds to aid research into NKH.

The condition is caused by a build-up of the amino acid glycine in the body, commonly manifesting in lethargy, breathing difficulties and seizures.

The disease, which slows development and is often fatal in early childhood, is relatively poorly understood, and Joseph’s Goal has raised hundreds of thousands of pounds since being set up in 2012 to fund research and raise awareness.

Joe was diagnosed in the days after his birth in 2009 and his parents, Paul and Emma, were told he was unlikely to reach his first birthday.

Mr Devine said: “It’s very easy to get wound up and worry and get obsessed with little things that aren’t really that important but if ever I think of Joe and all the things he goes through, it puts a lot of things that you waste time worrying about into perspective.”

For now, he is simply focused on getting into shape in time for June.

He said: “Certainly at the moment I couldn’t run one marathon, so it’s going to be a lot of running in the next few months to get up to speed.”

You can sponsor Mr Devine at https://uk.virginmoneygiving.com/fundraiser-display/showROFundraiserPage?userUrl=ChrisDevineLaticsMarathons&pageUrl=2