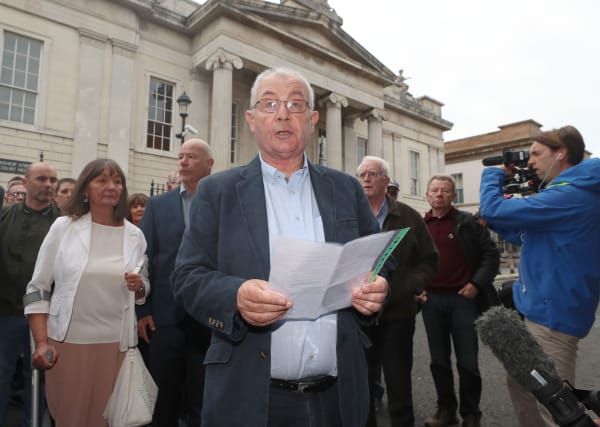 The first major hearing in the case against an Army veteran facing Bloody Sunday murder charges is set to take place in Belfast because of security fears.

The judge’s decision has angered families of the dead who believe he should appear in court in Londonderry – a “stone’s throw” from where one of the most notorious episodes of the Northern Ireland Troubles took place after soldiers opened fire.

Soldier F has been granted anonymity and has not entered the dock so far to face charges that he murdered two people during a civil rights demonstration in the city in January 1972.

Mickey McKinney, whose brother Willie was shot dead, said: “What happened on Bloody Sunday happened here 200 yards from where we now stand and Soldier F should be appearing at this courthouse.”

A month-long hearing to decide whether to send the accused, now aged in his sixties, to trial and to assess the evidence against him is due to be held.

Up to 25 witnesses could be called, a lawyer for the accused told a previous court hearing.

District judge Barney McElholm said: “We cannot convene this in just some hall or public space.

“There are considerations of security. We are willing to listen to any reasonable opposition put to us.

“At the moment, despite trying to get somewhere closer to the city, I am afraid Belfast looks like the venue.”

Bloody Sunday became one of the most notorious incidents of the Northern Ireland Troubles when members of the Parachute Regiment opened fire on a crowd of civil rights demonstrators, killing 13.

He faces a seventh supporting charge of the attempted murder of a person or persons unknown on the day.

He said: “We have spent a lot of time looking at this and trying to get a venue providing sufficient accommodation that those who wish to attend the hearing can do so in reasonable comfort, also there are security considerations and people being able to hear what is going on.”

After Friday’s hearing, a solicitor for the McKinney family and four wounded victims, Ciaran Shiels, said security concerns could be addressed in the city.

He said: “This is where the killings occurred – a stone’s throw from these buildings.

“We have always been of the view that F should be attending here in person at his committal and that remains the position.”

Lawyers for the families have two weeks to make submissions to the court challenging the decision to take the hearing to Belfast.

Mr Shiels added: “I don’t think security is the main issue in terms of the impetus behind this.

“Any police officer I was speaking to has said they would far rather have these proceedings take place here than in Belfast.”

The families of those killed also oppose granting anonymity to Soldier F.

Prosecutors have written to F’s representatives urging them to set out in detail the law they rely on to justify his continued anonymity, Mr Shiels said.

The case was adjourned until February 7.