Bleak Christmas for retailers as shoppers cut back 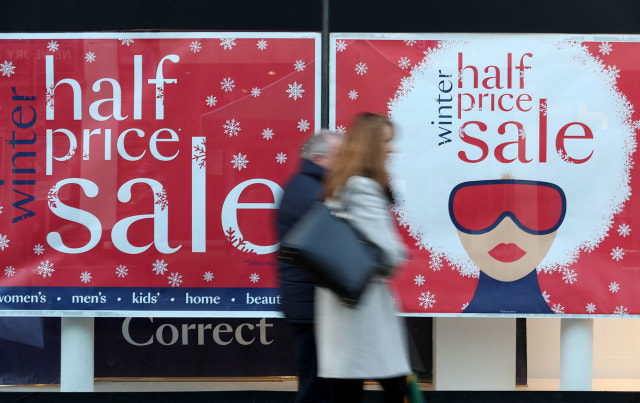 Shoppers cut down on both how much they bought and the amount they spent at the end of last year, new figures show.

In the three months to December, amount spent and quantity bought fell 0.9% and 1% respectively when compared with the previous three months, the Office for National Statistics said.

On a month-by-month basis, the amount spent dropped 0.3% and quantity bought was down 0.6%, compared with increases of 1.5% and 0.9% respectively a year earlier.

“The longer-term picture is still one of growth, although it has slowed considerably in recent months.

“December was the fifth consecutive month with no growth as food stores suffered particularly poor sales, showing the steepest fall for three years.”

The figures come as the British Retail Consortium reported earlier this month that December had been a difficult month for the high street.

Retailers have struggled to build sales, with several saying the toy and electrical markets were experiencing particularly tough conditions.

The worst-performing sector was textiles, clothing and footwear, with quantity bought down 2%, followed closely by department stores and food shops, down 1.8% in December compared with a month earlier.

The best-performing sub-sector was fuel, which saw a 1.6% increase in quantity bought.

Online sales continued to outperform the high street, but there was a significant slowdown, with growth of just 1.6% in December compared with the previous month.

There was a heavy 4.2% fall in online food orders compared with November – contributing to a 6.6% drop year on year.

Richard Lim, chief executive of Retail Economics, warned that the poor statistics could lead to a fall in GDP figures for the final quarter of 2019.

He added: “These numbers paint a pretty bleak picture for Christmas trading, especially for the food sector.

“It’s becoming increasingly clear that shoppers are happily shying away from the main grocers in favour of the discounters as they prioritise value over range.

“What’s more, the backdrop of healthier household finances has not benefited the retail industry as consumers remain very cautious in their discretionary spending.

“Shoppers’ propensity to spend remained weak as uncertainty around Brexit and a weaker economy has severely undermined their confidence.”