Thousands of people who have donated cash to a fund to get Big Ben to ring to mark Brexit look set to be disappointed.

Boris Johnson appears to have admitted defeat after calling for Big Ben to bong on January 31.

Downing Street said the Prime Minister was focusing on official plans to mark 11pm on January 31 as Government sources hit out at "intransigence" from the House of Commons authorities over the use of Parliament's famous bell.

Brexiteers were motivated to dip into their pockets after Mr Johnson said he was "working up a plan so people can bung a bob for a Big Ben bong" as the bell is currently silenced while renovations are carried out. 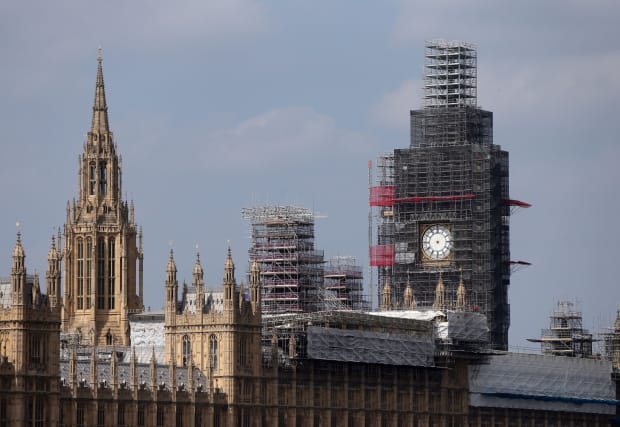 As a blame game into the fiasco began, Number 10 said it was a matter for the House authorities.

A Downing Street spokesman said: "This is a matter for the House, they have indicated they will not accept the money were the public to fundraise for this.

"The PM is focused on the Government's plans to mark January 31."

More than £110,000 has been pledged to meet the estimated £500,000 cost of bringing the bell back into service to mark the end of the UK's membership of the European Union.

The House of Commons Commission said it would be an "unprecedented approach" to fund the cost through public donations and "any novel form of funding would need to be consistent with principles of propriety and proper oversight of public expenditure".

Asked whether people should contribute to the appeal, the Prime Minister's official spokesman said: "I'm just reflecting that the Parliamentary authorities have set out some potential problems.

"Our focus is on the events that the Government are currently working on."

Commons Speaker Sir Lindsay Hoyle baulked at the idea of paying the cost of bringing the bell back into use, saying "you are talking about £50,000 a bong".

But Brexiteer MP Mark Francois said the Prime Minister would be mad to back down now, and the campaign was "a real demonstration of people power".

Commons Leader Jacob Rees-Mogg told MPs: "It seems to me with regard to bunging a bob for Big Ben bongs one shouldn't look gift horses in the mouth and, if people wish to pay for things, I think that should be considered as part of their public-spiritedness rather than feeling that everything should always fall on the hard-pressed taxpayer."

The appeal by the Stand Up 4 Brexit campaign backed by Mr Francois had raised more than £110,000 on Thursday afternoon.

More than 6,000 people had donated to the GoFundMe page, with cash coming in from 38 countries.

If the appeal is not successful, the money is set to go to military charity Help for Heroes.

Mr Francois said: "As the Prime Minister effectively initiated this campaign live on TV two days ago, and as we are clearly going to hit the target, he would be mad to back away from it."

Rebecca Ryan, founder of Stand Up 4 Brexit, said: "We're really excited to have reached the £100,000 milestone less than 24 hours after launch.

"This bears testament to the strength of feeling amongst the British people that Big Ben, the focal point of our democracy, must bong to mark this historic occasion – the moment when we finally take back control."