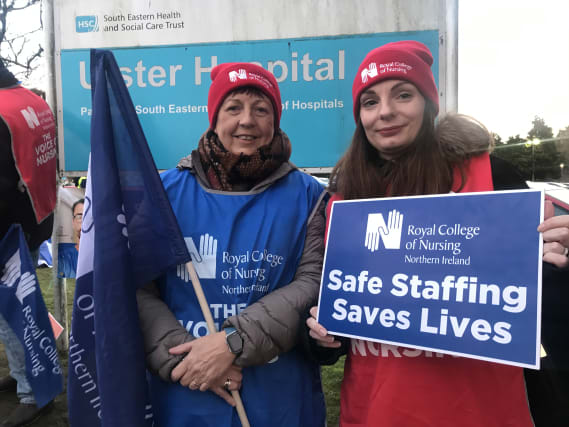 Nurses have suspended strike action over pay in the first major coup for restored power-sharing at Stormont.

Extra money for salary parity with England and promises on safe staffing levels have been provided by Northern Ireland’s Health Minister Robin Swann.

The UK Government has meanwhile been accused of “penny pinching” after its financial settlement underpinning the Stormont deal fell short of some expectations.

The Royal College of Nursing’s Northern Ireland director Pat Cullen said: “The progress this week is testament to having political leadership in place following three years of standing still.”

Thousands of nurses took three days of strike action this year and last, which paralysed parts of the NHS and led to the cancellation of many medical appointments and delays to operations.

Mr Swann pledged an extra £30 million from within existing resources this year in a bid to end the industrial action.

Ms Cullen said: “This has been a long and difficult road for nurses in Northern Ireland but following the unprecedented decision to take strike action, our members finally have something concrete to consider in relation to both the restoration of pay parity and safe staffing.”

Northern Ireland Secretary Julian Smith said it was the best financial deal of any Northern Ireland talks settlement and worth £2 billion once extra money for UK regions from central Government actions is included.

“We then have the annual budget in March, the UK Budget, and we have a deal for Brexit,” he said.

“So the key task for this Executive now is to focus on its priorities.”

Mr Smith said the Stormont parties have agreed to publish the “fuller details of an agreed programme for government” within two weeks of the restoration of the institutions.

He added: “This Government stands ready over the coming months and years to work with the Executive, we really want to support it, but £2 billion of money now is an extremely good start and I’m confident that is the basis for a strong future for Northern Ireland.”

Sinn Fein Finance Minister Conor Murphy said the extra £1 billion from the Treasury to support restored devolution was an act of bad faith and fell short of what was necessary to fulfil commitments in the agreement.

It included “a rapid injection of £550 million to put the Executive’s finances on a sustainable footing”, the Northern Ireland Office (NIO) said, including £200 million to end the nurses’ dispute.

The UK Government said the package will be accompanied by “stringent” conditions contained within the Stormont deal, around accountability for public spending and the development of sustainable public services.

Former Ulster Unionist leader Mike Nesbitt said it was hard not to view the Government’s actions on money as payback.

He said: “Payback from the Conservative Party to the DUP for the way they treated them when they had the balance of power at Westminster and also payback from the Treasury, who I think are sick of the kind of fill your boots attitude that some people here demonstrate when it comes to Treasury money outside of the bloc grant.”

He added: “I would also encourage the five parties of the Executive to stick together, to stay collegiate and to make a plan to go back and ask for more money, not with a begging bowl but to make the case that what we need to do is transformation as well as dealing with the short-term issues.”