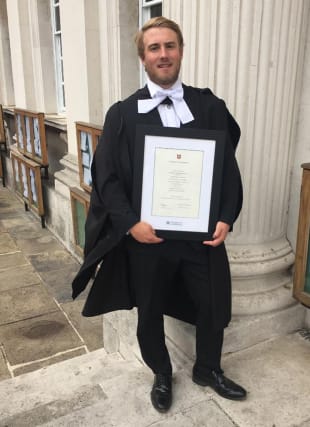 The father of a “fit and healthy” Cambridge graduate who died after an underwater swimming challenge has told an inquest he had been performing the same “party trick” since he was a child.

Dominic Hamlyn, 24, became unresponsive while swimming in a pool during his brother Benedict’s 21st birthday party at the family home in Crundale, Kent, in the early hours of July 28 last year.

His father, neurosurgeon Peter Hamlyn, told the inquest in Maidstone he gave his son emergency treatment as Benedict held his hand while they waited for paramedics to arrive.

Dominic was taken to William Harvey Hospital in Ashford but he died about 15 hours later.

The inquest heard that Dominic had challenged a family friend to swim lengths of the pool underwater and had swum about two-and-a-half before he was seen to be not moving.

His father, an expert in sport-related injuries who treated boxer Michael Watson after his near-fatal brain injury during his Chris Eubank fight in 1991, said his son had been unresponsive for “seconds rather than minutes” before being pulled out of the pool.

A medical student at the party initially performed CPR before Mr Hamlyn took over until paramedics arrived at around 3.45am.

Peter Hamlyn said his eldest son could usually swim four or five lengths underwater – around double what he had swum on July 28 – and would take a series of deep breaths before doing so.

“It was an entirely routine thing which I had seen him do since he was a child. It wasn’t unusual,” Mr Hamlyn told the court.

Dominic, a graduate of University College London who had recently completed an MPhil in Business Studies at Cambridge, was described as “fit and healthy”.

He played cricket and rugby, ran the London Marathon in 2014 and had recently taken part in a university rowing race.

A post-mortem gave the cause of death as multiple organ failure with acute respiratory distress syndrome and drowning as contributing factors.

Pathologist Dr Olaf Biedrzycki, who had been asked to give an opinion, said it could have been shallow water blackout – a loss of consciousness underwater – caused by a lack of oxygen to the brain.

But following a discussion with Mr Hamyln on Thursday morning, Dr Biedrzycki said that “on the balance of probability there probably was an underlying heart condition.

“If he wasn’t trying to do more than he had done before, that is slightly more likely than shallow water blackout.”

Professor Perry Elliott, a cardiologist instructed by the family, was also involved in the discussion with Dr Biedrzycki and gave a second opinion in a written report which favoured sudden death syndrome.

Mr Hamlyn and Dominic’s mother Geraldine held hands and wept as the assistant coroner gave his ruling, which acknowledged the differences in medical opinion.

“Nobody could have, or will ever with any certainty, say what the medical cause was in Dominic’s death,” Mr Matthewson told the coroner’s court.

He gave the cause of death as acute cardiac arrhythmia – sudden adult death syndrome.

The inquest heard that alcohol was not relevant and Dominic had given a speech at the party earlier in the evening.

Dominic’s father and family later issued a statement saying that data from coroner’s death certificates showed at least 12 young people die of cardiac arrest each week in the UK, and their inquest experience suggested this was likely to be a gross underestimate.

“As a result, victim’s families will continue to go unscreened and readily treatable warning signs missed. If I were not a doctor and one with specialist expertise in sports medicine my family would number amongst them.

“In life Dominic gave so much to others. It is up to us to ensure his legacy is not just a family immersed in our grief but that his loss brings awareness and change. It was not possible to save his life. It is possible, with the knowledge we have today, to save other young lives.”