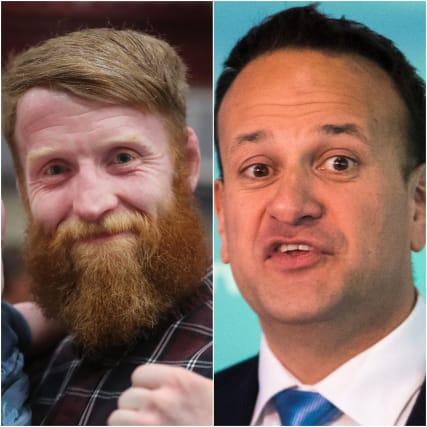 Sinn Fein President Mary Lou McDonald has said she will not be removing one of its councillors who had to apologise for remarks he made about the Taoiseach, Leo Varadkar.

Sinn Fein councillor and MMA fighter Paddy Holohan said remarks he made in a podcast about Mr Varadkar were “misinterpreted”.

In a recent episode of Mr Holohan’s podcast called No Shame he said he would prefer a “family man” to be taoiseach, this was seen as a reference to Mr Varadkar who is gay.

“We need people running the country.

“Someone that knows what it’s like to have kids, maybe, hopefully, boys and girls, so when you’re creating policies and stuff that’s going to go on, you’re like: ‘right, it makes sense’.

“I know what it’s like to collect my young fella from school so I know what school time traffic is like.

“When I’m making decisions, I can have an experience of it and bring that into the equation.

“The man that is a family man, that goes to work, looks after his kids, has come up through the system, has experience, maybe is a solicitor as well so has that experience – that’s who should be running the country.

“Someone who knows what the masses of people are going through.”

Sinn Fein said earlier on Thursday Mr Holohan should apologise and withdraw the remarks and the comments were not the views of Sinn Fein.

Mr Holohan apologised in a Twitter post on Thursday and said his comments were misinterpreted “and not meant the way they have been portrayed.”

Speaking in Dublin on Thursday, Ms McDonald said: “Paddy has apologised and that was absolutely the correct thing to do.”

“He is supporting a woman in terms of this electoral contest.

“I understand Paddy has apologised and an apology was the correct thing to do.

“I think Paddy is probably frustrated at the fact that he is known to be a very approachable, very open minded and kind person and unfortunately the remarks that he has made have given the impression that he holds other views.”

“This is about circumstances in which people say something wrong and they apologise for it.

“Anybody can speak out of turn or say something that causes hurt and in those circumstances the correct thing to do is apologise.”

Asked if she would remove him as a Sinn Fein councillor, she said: “No, he has apologised.

“People in the public domain…when you make a mistake you apologise for it,” she said.

“When you mis-speak, when you make a mistake or when you call offence, you apologise for the remarks and I think that was the correct thing to do and the reasonable response.”

“We have been very active in respect of not just marriage equality and LGBT rights and we pride ourselves as an organisation that is open and inclusive and Paddy knows that and he is part of it.

Ms McDonald said she did not think that he should resign as a councillor as he had apologised for his remarks.

“The best of people can make a mistake and can mis-speak and cause hurt.”