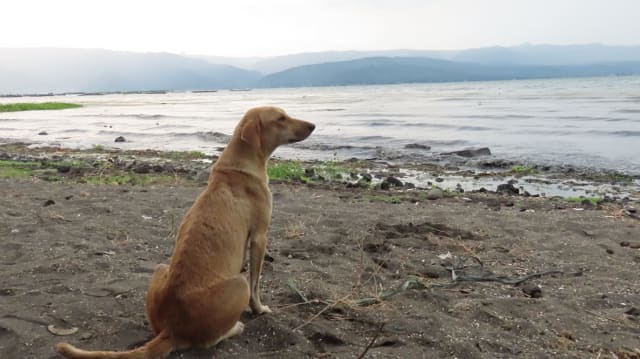 A dog has been rescued by charity workers looking for animal survivors of the eruption of the Taal volcano.

Palakitik came “running up through the ash” when workers from Peta Asia arrived on the island on Wednesday.

The dog was well known to Peta staff from previous work they had done on the island, providing veterinary services to horses.

Peta said: “Whenever our boats arrive there, we call for her and she always excitedly scampers up to greet us and follows our team around everywhere.”

Although residents of the island were moved to safety when the volcano began to erupt on Sunday, many animals remained.

Peta workers arrived for the first time since the eruption on Wednesday and were unsure whether or not Palakitik was still alive.

But the charity said: “To their amazement and relief, she came running up through the ash, overjoyed to see friendly faces!”

Palakitik has now been taken off the island to receive veterinary care and according to Peta she will “be taken care of for the rest of her life”.

However, Peta said there are other animals on the island that need saving too: “We were only able to be on the island for a short time, but it was long enough to put down food and clean water and also rescue some other animals. We don’t know when we’ll be allowed to go back, but we’re working with the Filipino government.”