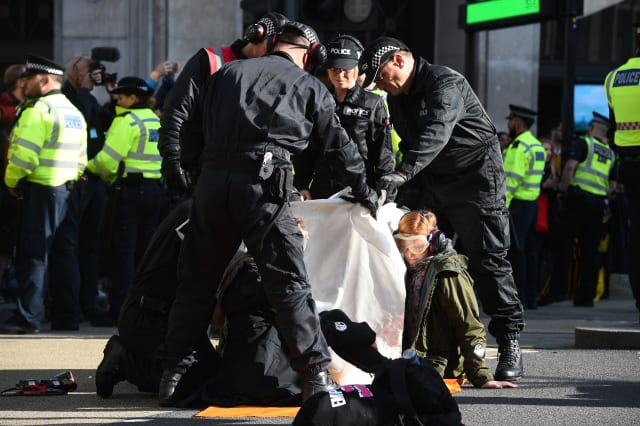 A retired GP who was arrested near the Houses of Parliament during the Extinction Rebellion climate change protests has said he has mixed feelings after hearing he will not be prosecuted.

Dr Paul Shepherd, a 66-year-old grandfather, said he had wanted to make a statement in court and say that defying the law in the current circumstances was as justified as breaking a window during a house fire.

The GP, from Lanchester, County Durham, who practised for 40 years, was held in October after lying down in the road near Parliament Square during an XR protest which saw hundreds of people arrested.

He was detained for 30 hours because he refused to confirm his name and had no identifying documents.

Dr Shepherd had denied a public order offence and was due to stand trial on Monday but before Christmas he heard from his solicitor that the trial was being discontinued.

He was told that the police’s use of certain powers during the protest has been deemed unlawful.

The father-of-three, whose wife, Sonny, was also protesting when he was arrested, said: “I had mixed feelings about it.

“It’s less hassle and cheaper and I don’t have to worry about going down to court, but, against that, I didn’t get my chance to read my statement.”

He would have told the court: “I think that breaking the law is justified in the current crisis, in the same way it is justified to break a window in the case of a house fire.

“I will be unable to look my grandchildren in the eye if, in 20 years’ time when possible hurricanes, floods and sea level rises transform our world, they ask ‘What did you do in the war on climate change?’”

Dr Shepherd said people are starting to see the reality of climate change, but as yet many are unwilling to take the necessary action, and he feels government must take the lead.