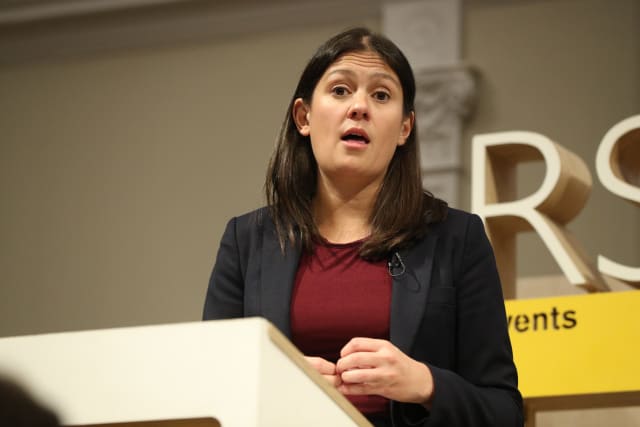 Labour leadership candidate Lisa Nandy has said the UK should not strike a post-Brexit trade deal with the US if Donald Trump quits the Paris Agreement to tackle the climate crisis.

The backbench MP argued that Boris Johnson should use negotiations to pressure the US president to stay in the accord to limit temperature rises to well below 2C this century.

Setting out her vision of Britain’s role in the world after exiting the EU, Ms Nandy also defended freedom of movement and criticised Jeremy Corbyn on Russia and Brexit.

Mr Trump has called climate change a “hoax” and is working to sever US ties to the key environmental pact, but the Wigan MP believes the Prime Minister’s trade negotiations could halt this.

“We should be clear now that we would refuse to agree any trade deal with a country that has not ratified the Paris Agreement,” she told the RSA in central London.

“We must use trade to support climate action, not hamper it.”

She praised the EU and Mr Trump’s predecessor Barack Obama as inspirations for using trade deals to “drive up standards for people around the world”.

Asked about the ultimatum to the current president, she rejected that the position would harm the economy, saying the climate crisis was one of the greatest threats to the economy.

“It’s not an either or and I don’t accept this false binary we’ve got to do both,” she added.

Ms Nandy, who was one of Labour’s prominent voices calling for a soft Brexit after the referendum, criticised Labour’s outgoing leader and others in the Cabinet for the failure on the issue.

“We’ve allowed the right to frame the debate into a series of false binaries and in doing so allowed a fully fledged cultural war to be unleashed,” she said.

“The trap was set: you can be for your country or you can be for the world. And senior Labour politicians rushed headlong into it – it was a serious failure of leadership.”

She set out her internationalist vision to win back power, saying Labour has to “think bigger” than the EU and look to nations across the world for trade agreements and co-operation.

“The focus on the EU – inevitable as it has been – has squeezed out that thinking. For all the talk of ‘global Britain’, we are at risk of retreating to an idea of a British Empire 2.0 not embracing the world and its challenges as they are now,” she said.

Labour should have defended free movement and the benefits it brings, Ms Nandy argued, while “recognising it has flaws” and not dismissing concerns “as simply racist anti-immigration sentiment”.

“I believe in free movement,” she said.

“If it were paired with renewed and radical investment that enabled opportunities for young people, decent jobs, training and skills – then I know that those concerns about freedom of movement would have fallen away.”

She said Mr Corbyn was “completely wrong” to call for dialogue after Dawn Sturgess was killed by the Novichok Russia is accused of using to poison former Russian double agent Sergei Skripal.

“At a crucial moment, we hesitated in condemning an authoritarian regime that supports Donald Trump, invades its neighbours, steals its country’s wealth, that interferes in elections in Europe and America, attacks minority communities and then used chemical weapons on the streets of the UK,” she said.

Meanwhile, fellow leadership hopeful Jess Phillips was showcasing her Commons challenges of Mr Johnson in an attempt to position herself as the strongest candidate to take him on.

She also told the Daily Record she was “open minded” about the decriminalisation of drugs.

Hopefuls were trying to win the support of affiliates such as unions and constituency Labour parties as the second stage of nominations opened on Wednesday.

In order to progress to the postal ballot of members and supporters, candidates must get the support of 5% of local parties or three affiliates, including two unions, by February 14.

Ms Nandy won the support of the National Union of Mineworkers, while Sir Keir Starmer has been backed by Unison.

The trio progressed to the current stage – along with Rebecca Long-Bailey and Emily Thornberry – after winning enough support from Labour MPs and MEPs.

The successor to Mr Corbyn, who led Labour to its worst general election defeat since 1935, will be announced on April 4 after members and other supporters cast their votes.